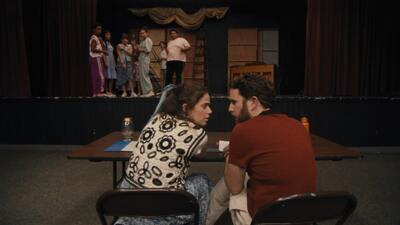 It’s not uncommon for a laughing break to win the Sundance Audience Award, or at least make for one of the most popular titles in a sea of exciting but far more serious movies. That’s likely to happen for US Dramatic Competition title “Theater Camp,” a thoroughly funny and easygoing comedy that applies the “let’s put on a show” mentally of the stage to making a heavily improvised film comedy, one greatly influenced by “Waiting for Guffman,” “Wet Hot American Summer,” and blessed by Todd Graff’s cult favorite “Camp” (which premiered at Sundance exactly 20 years to the date of “Theater Camp”‘s big debut). The film marks the directorial debut of Molly Gordon and Nick Lieberman, who share co-writing credits with Ben Platt and Noah Galvin. Their collaborative spirit in writing the story and its wonderfully silly songs is felt throughout, and it helps makes this movie as charismatic as it ought to be.

“Theater Camp” is about a three-week camp in which young kids take classes in dance from Clive (Nathan Lee Graham); learn about acting from Amos (Ben Platt); music and past lives from Rebecca-Diane (Molly Gordon), and also costuming. And if those are all booked up, there’s spotlighting (taught by Noah Galvin’s Glenn, the techie). The camp is being run by a dopey Jordan Belfort-wannabe named Troy (Jimmy Tatro, nailing the out-of-touch nature of the anti-theater kid), whose mother Joan (Amy Sedaris) owns the camp but had a seizure during a youth performance of Bye, Bye, Birdie and is in a coma. A camera crew follows the ADIROND ACTS camp events as Rebecca-Diane and Amos struggle to put on their greatest original work yet, the life story of Joan (titled “Joan, Still”—hilarious). Troy is dangerously close to accidentally selling the camp to the sneaky Caroline (Patti Harrison), who represents finances for the nearby square rival camp.

From the beginning, “Theater Camp” cracks what can be so warmly entertaining about its premise—showboating kids are adorable, and pretentious adults can be funny. And while much of the comedy is improvised, it finds so much good material in its fast pace that everyone becomes a scene-stealer: sometimes its Platt with his ridiculous, straight-faced acting advice, or the dry delivery of Ayo Edebiri as a new hire with no experience in stage-fighting nonetheless teaching the course, or one of the kids from the camp when they belt out a genuinely great musical number, usually with a good joke tagged on the end. (There are so many talented kids in this movie.) Or then there’s Glenn, who rolls down a hill in a ten-second shot with the same energy as the pitch-perfect surprise he unleashes in the third act. And we can’t forget Alan Kim, the kid from “Minari,” who does a great send-up of an agent.

The film is essentially a lovingly curated collection of approximately a thousand jokes about theater kids—young and adult-age—that it then hangs on its thin but sturdy line of a plot. I think I laughed loudest at a joke about the slinky “Fosse kids” of the camp, but there are so many good jokes about the love of putting on a show, and the star mentality that everyone has. And it’s key that in joking about this culture of young creatives, it always does so with a big heart (especially as the kids can be their most fabulous selves here). Gordon and Platt save the more brutal jokes about dashed Juilliard dreams for themselves, and the two have great chemistry even as their wildly co-dependent friendship starts to implode. It’s particularly funny to see a self-aware Platt send up the idea of a self-serious actor with so much self-awareness, making for his best role film yet.

“Theater Camp” is smartly conceived, so much so that right when it starts to wear down its premise of “theater kids, haha,” it gifts us the magnificently bad “Joan, Still,” with songs written by Gordon, Lieberman, Platt, Galvin, and Mark Solennick. Like “Theater Camp,” it will likely haunt auditions, car rides, dorm rooms, and, yes, theater camps for years to come.

David Redmon and Ashley Sabin’s documentary “Kim’s Video,” premiering in the festival’s NEXT section, concerns the adventures of co-director Redmon and a horde of VHS tapes and DVDs that used to belong to franchise owner Yongman Kim of New York City’s Kim’s Video store. Thousands of tapes comprised the collection, and for unabashed movie lovers like David (who begins this doc by talking about just how much he loves movies), the rarities, bootlegs, and resources made his cinephilia even deeper. Store clerks included Alex Ross Perry and cinematographer Sean Price Williams (both interviewed); the Coen brothers had 600 dollars in late fees. And one day, through a strange course of events best revealed by this movie itself, the tapes ended up in the small Italian town of Salemi after Mr. Kim offered to give the closing store’s horde to the candidate he found most worthy.

After many false starts—will this documentary be about David loving movies? Or experiences of working at the hallowed video store? Or Yongman Kim’s background as an immigrant who fell in love with movies and knows Quentin Tarantino?—“Kim’s Video” finally settles on its goal of David getting the tapes out of Italy. Through some sneakiness that the movie coats over as cute, he sees the locked archives and the poor conditions the tapes and DVDs are in. “I have my membership card,” he says, while also playing the dumb tourist card.

For whatever narrative focus this movie gravely lacks while trying to sell itself, it lets obsession about this collection become its main spectacle. David’s mission is a multi-year odyssey that includes a lot of traveling back and forth to Salemi and getting close with the Italian head honchos who were involved with the strange deal. And in chasing “stranger than fiction” kudos as a reason for this project to exist in feature-length, it throws in some nerves about the experience. A few beats are about his worry in upsetting the mafia: “I don’t wanna be in a Scorsese movie,” David’s voiceover says during one scene.

While talking about his experience, David’s voiceover will sometimes say, “I felt like [character name] in [movie],” accompanied by clips of what he’s referencing (“Blue Velvet,” “Videodrome,” “Poltergeist,” etc.) There’s little wisdom to be found, just eyerolls. One can appreciate the dedication that went into this saga, but being obsessed with movies does not make a great visual storyteller alone.

Sundance 2023: Aum: The Cult at the End of the World, Nam June Paik: Moon is the Oldest TV, The Stroll