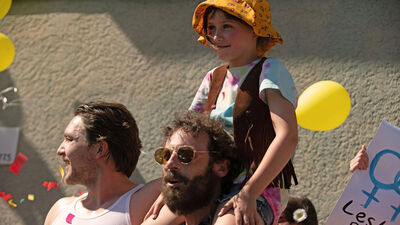 Sometimes you can see common themes in the films that unfold at the Sundance Film Festival, but my experience at the Eccles Theatre here on the first full day of the first in-person event in three years was the opposite of that, capturing the range of this year’s program. These three movies have almost nothing in common, except for the fact that they’re all worth your time when they descend from the mountain air to a theater or streaming platform near you. With these three (and a press screening that’s still under embargo until Monday), I had one of my richest Sundance days in years. It feels good to be back.

One of my biggest surprises in the decade I’ve been covering this fest has to be Andrew Durham’s “Fairyland.” Not only was it stuck with a 9am premiere on a business day—not usually a great sign of quality—but it’s of a genre of drama that usually doesn’t work for me. Memoirs that are effective on the page often lose their emotional impact when translated to the screen, usually because filmmakers destroy all the personal touches in an effort to make something more broadly accessible. Durham never does this. The debut director, who was given the book on which this is based by producer and friend Sofia Coppola years ago, finds the right balance between personal touch and giving space to tell someone else’s story. It’s a film that’s rewardingly rich in detail, and it’s the specificity of it that gives it so much of its emotional heft because we have to believe characters exist in the real world before we care what happens to them. We undeniably do here in a film that I suspect will move many people who lived through this dark chapter in history.

“Fairyland,” based on the memoir by Alysia Abbott, opens in the ‘70s with the death of Alysia’s mother, killed in a car accident. It completely throws Alysia’s father Steve (Scoot McNairy) for a loop, and he decides to move across the country with his young child, becoming a part of a Haight-Ashbury commune run by an outgoing character played by Maria Bakalova. It’s here that Alysia realizes that her dad is gay as he first falls for one of the guys who crashes on the commune couch (played by Cody Fern) and then later dates openly in the San Francisco scene (including a long relationship with a guy played by Adam Lambert). While Alysia’s grandmother (Geena Davis) questions Scott’s ability to raise his daughter, he imbues her with a creative spirit, pushes her independence to a level that will allow her to standout later in life, and generally does the best he can in his situation. He uses the phrase “noble failures” late in the movie, and I think that’s a beautiful way to describe a parent who may stumble even as he’s trying his best.

As the film transitions to the ‘80s, Emilia Jones (“CODA”) steps into Alysia’s role, proving that her work in the first Sundance Best Picture winner was no fluke. She captures a young woman trying to find herself with a father she struggles to understand. While dad is pushing progressive ideas and how to express creativity—he’s a poet and author—Alysia sometimes just wants to be a normal teenager. Jones gives a delicate performance, refusing to lean into any of the tropes of the troubled teen. She appears right when the movie could go into melodrama, and she does the opposite by grounding it.

Of course, any movie with a first half set in the gay scene in the ‘70s in San Francisco has the eventuality of AIDS in its narrative, but this is handled movingly and delicately. Alysia notices the obituaries are full of too many young faces, and everything shifts when she meets a 23-year-old friend of her dad who is in hospice. The incredibly talented and underrated star of “Halt and Catch Fire,” McNairy does the best film work of his career in this half of the film, conveying what AIDS did to so many passionate, creative souls and how this man was able to pass his creativity down to his daughter even surrounded by so much pain. It’s a powerful piece of work all around.

There’s undeniable emotional power also coursing through every frame of Davis Guggenheim’s “Still: A Michael J. Fox Story.” The bio-doc genre of talking heads sharing anecdotes about famous people they once knew has long ago grown tired, but Guggenheim smartly avoids the traps of a story that most people know. Michael J. Fox hasn’t been a recluse. He skyrocketed to fame in the ‘80s as one of the biggest TV and film stars in the world, and he’s been remarkably open about his Parkinson’s diagnosis in the decades since. Still, Guggenheim finds creative ways to make the story of this eternal optimist feel powerful again. His two smartest choices are to let Fox tell his own story—there are no talking head interviews with colleagues at all, and the director’s voice in interviews is the only one heard regularly outside of Fox—and to creatively “cast” Fox himself in the story of his life.

Guggenheim and his ace editing staff had hundreds of hours of footage of Fox from shows like “Family Ties” and “Spin City,” and the remarkable number of films he made in the ‘80s and ‘90s—the film makes a note of how much Fox was a workaholic during this period too. And so they use Fox himself in flashbacks. For example, if the present-day Fox is talking about making a phone call to a network exec, there’s a shot of a young Fox picking up a phone, probably from “Family Ties.” It’s a fascinating technique that brings an often-stale part of this genre to life. There’s a sequence that details how hard Fox had to work while shooting “Family Ties” and “Back to the Future” simultaneously that’s breathtakingly structured with old footage and new recreations. And Guggenheim really leans into how often Fox moved in his films—running from place to place, something he can’t do anymore.

Of course, the beating heart of “Still” is Fox, who reads some of his books as the narration and answers Guggenheim’s questions. He’s revealing, opening, and never gives into pity. There’s a shot early in the film in which Fox falls on a sidewalk, and I wished for a second that it wasn’t there. I didn’t want to see one of my childhood movie heroes in that condition and thought maybe it should have been cut. And then Fox stamps the scene with a brilliant one-liner that produced a massive laugh in the crowd. He’s always an entertainer, even when he’s struggling. And his willingness to share that struggle and push through it is an empowering thing of beauty, as is the relationship with Tracy Pollan that really elevates the final act of this film.

Fox said in the Q&A after that he’s struck by how lucky he is to have such a beautiful family, and it’s one of the most moving portrayals of support I’ve seen in a doc in a long time. Hearing Fox explain what his wife and kids mean to him is simply gorgeous. There’s something ironic about a star who rose to fame in a show called “Family Ties” discovering that family was what would be most important to him in the end.

While I expect audiences to wrap their arms around “Still,” there was visible recoiling in the crowd that watched the premiere of the brutal “Magazine Dreams,” a drama that’s a little bit of “Taxi Driver,” a little bit of “Pumping Iron,” and a lot of the mega-talented Jonathan Majors. The star of “The Last Black Man in San Francisco” and “Creed III” gives his all and then some to this film, fearless throwing himself into a role that demands more than most actors can give. It’s an unsettling journey into the mind of a man who has shaped his body with anger even as he has destroyed his soul. It’s a big ask to spend over two hours with someone who’s so mentally unstable that it feels like nearly every scene could end in violence, but director Elijah Bynum has made a movie that’s designed to push viewers to a place of toxicity that makes them uncomfortable. It definitely does that and then some.

Majors plays Killian Maddox, a bodybuilder who dreams of being on magazine covers like his idol. If he’s not writing “Stan”-esque letters to the bodybuilding king, he’s caring for his grandfather or pining after a local cashier (Haley Bennett). He spends almost all of his free time working on his body, which includes not just weightlifting but a regular steroid regimen that has left his health teetering on the edge of a fatal diagnosis. He can’t cut his body to remove the tumors steroids have left on his liver because the scar would damage his career. And then there’s Killian’s anger. When he feels cheated by life, he lashes out, leading to a series of violent, unsettling exchanges as the film threatens to build to serious tragedy.

I think some of the final act of “Magazine Dreams” is a little manipulative in a way that doesn’t quite pay off (in part because there are 5-6 endings). Still, it always feels like a film that’s trying to understand someone who has been cheated by life, the kind of person who feels completely misunderstood by society. Majors goes all-in on this character, conveying his instability in a palpable way. When Killian faces anything extreme—either good news or bad—Majors locks up, unsure of what to do next. It’s as if all of that extreme body sculpting has made him too big to fit in the world. And yet he has no alternative. There’s a powerful desperation in this performance that adds tension to the entire film. There’s a tighter version of this story with a sharper final act, but no other actor could have pulled this off. People will be talking about this performance all year.