Sundance 2023: Aum: The Cult at the End of the World, Nam June Paik: Moon is the Oldest TV, The Stroll 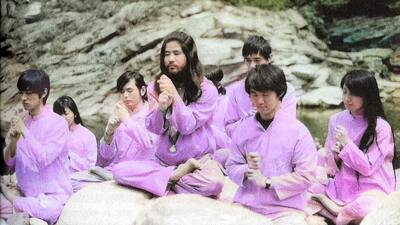 A pattern is perceptible in this year’s Sundance’s US Documentary Competition. Though the common thesis—between a film about a Japanese cult, a movie concerning a Korean video artist, and a narrative by a transgender sex worker turned director—isn’t readily perceptible, it exists. Beyond these films comprising part of Sundance’s US Documentary competition, they also concern the breaking of flawed systems.

Take “AUM: The Cult at the End of the World,” from co-directors Ben Braun and Chiaki Yanagimoto. On its face, it’s a study of how a susceptible group of people during a vulnerable point in Japanese history became prone to following the whims of a self-proclaimed religious leader. But really, “AUM” stands as a cautionary tale against the mixing of church and state. By way of the harrowing audio capturing first responders, the dense documentary opens in 1995, when a sarin gas attack in a Tokyo subway led to mass death and injury. From there, we go back to 1989, when yoga instructor Shoko Asahara converted his practice into Aum, a dangerous religion.

Aum attracted disaffected young people in a country—at an economic high yet still scarred from World War II—searching for spirituality. The filmmakers chart the rise of Asahara, from eccentric buffoon to wealthy arms buyer, through interviews with the journalists and victims who worked to uncover Asahara’s crimes and the protege who helmed the leader’s Russia-based operations. The filmmakers also connect the alternative facts used by cults to contemporary American politics—particularly the rise of Trumpian tactics—but the thread, while tangible, isn’t pulled through enough to be felt.

“AUM” is initially a slog. Mainly because the web of influence by the cult was so vast, their misdeeds so under-investigated by authorities that it took time to wholly center the audience. But once we hit the accelerated fall of the organization and Asahara, the film locks into gear to demonstrate how law enforcement—wary of persecuting a religious group—allowed this domestic terrorist organization to continue doling out harm. In its second half, “AUM: The Cult at the End of the World,” is a sharpened, engrossing warning against false prophets that never feels heavy-handed yet leads to an unmistakably chilling ending.

Known as the father of video art and the man who coined the term “the electronic superhighway,” Nam June Paik, an avant-garde artist hailing from South Korea is the subject of director Amanda Kim’s digestible documentary “Nam June Paik: Moon is the Oldest TV.”

In Kim’s film we travel with Paik, from his privileged upbringing in the aftermath of World War II, to his stateless upheaval, to his John Cage influenced awakening in Germany and his later innovations in America with Charlotte Moorman. Brisk editing, enamored participants and a love for Paik’s body of work further fuels “Moon is the Oldest TV,” which understands how to present an evasive figure like Paik.

It’s somewhat disappointing, however, that Kim opts for a conventionally paced, linear, talking head structure for such an unconventional figure. And yet, Paik’s light-heart spirit does thrum through these minutes, exciting our eyes not only by way of Paik’s self-deprecating humor, but his philosophical musings and his inventive spirit: Conducting a worldwide live stream, broadening the use of personal video equipment, and raising video art to a high art form.

We marvel at the artist’s elastic mind, and his unbridled creativity. Indeed, Kim does swift work connecting Paik’s artistic philosophy to his reality. He was a man without a homeland, a man haunted by his aversion to his business-minded father. And yet, the documentary has a habit of talking around Paik’s personal life, such as his father being a collaborator with the Japanese during their violent occupation of Korea.

It’s odd that Kim would omit this detail. That background doesn’t subtract from Paik’s artistic ethos but adds another texture upon his desire to dismantle oppressive systems. A similar qualm arises from the director’s reticence to discuss Paik’s personal life. At one point, one of the artist’s former neighbors shares how Paik’s marriage sounded tumultuous. It’s not altogether clear if “tumultuous” is a euphemism for violence, but we receive so few other details about his marriage—how Shigeko and he acted as partners—that the intimation dangles in the wind. Instead, Paik only exists in proximity to his work, which is probably how he’d like it.

Kristen Lovell, the Black transgender co-director of “The Stroll,” opens the film by watching footage of herself in the 2007 documentary “Queer Streets.” She wistfully sees the images of her younger self and recalls how she hoped the opportunity would provide her with an avenue for becoming a filmmaker. She wanted to tell the story of 14th street in New York City’s meatpacking district, what’s colloquially called the stroll, where queer sex workers lived, found community, and experienced danger while obtaining financial independence. In telling the area’s tale, unfortunately, Lovell neglects her own journey.

She teams with fellow trans director Zackary Drucker to talk with the queer people who spent years walking those very now gentrified streets. Lovell acts as the anchor in these discussions, giving the talking heads levity and space to discuss their memories freely. Through their talks, we recount the verve of the meatpacking district—dilapidated yet strongly tied together by a sense of togetherness and identity—the funny (and horrifying) stories of their Johns, and the activists they looked toward, like Marsha P. Johnson and Sylvia Rivera, to find their political voice. Most of all, they offer a candid interrogation of the transphobic, extralegal tactics by the NYPD to arrest them and the gay and lesbian community’s apathy toward their personhood. It’s a quick jaunt through history told with love, care, and assuredness (though we continually wish Lovell told us how she came to be a director too).

Lovell and Drucker also take a measured approach to the area’s nostalgia; while 14th street forged fond memories for these queer sex workers, it didn’t come without consequences, such as death, drug addiction, and physical abuse. The even-handedness of that reality, however, makes the final 15 minutes of the film all the more perplexing. One former sex worker, Cashmere, goes from soaking in the present-day corporate takeover of the meatpacking district to eventually crying in Lovell’s arms as they remember the toll the area enacted. One wishes the filmmakers ended on that complicated note, one that sums up their emotional thesis. Instead, they do what many documentaries do today; they end on the upward trajectory of contemporary politics and present-day gains without touching upon the current hurdles faced by trans men and women. It’s an all too neat ending for a film that promises something far more complex.