Twenty Movie Legends We Lost in 2022 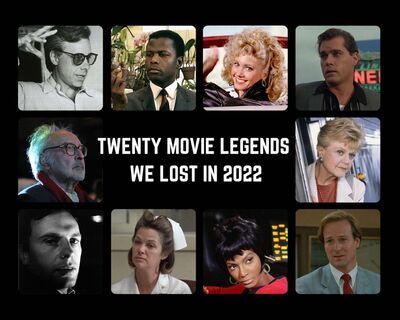 As we embark on a new year, let us pause to reflect on some of the movie legends we lost in 2022, starting with Sidney Poitier and then proceeding in alphabetical order with the rest. You can find our complete list of tributes from the past twelve months here, which includes such legends as Louis Anderson, Kevin Conroy, Lata Mangeshkar, Tony Sirico, Fred Ward, David Warner and others. Twenty towering and dearly departed figures in cinema history are spotlighted below. Click on each name, and you will be directed to the full tribute.—Chaz Ebert

“When Poitier arrived on the scene, Black actors were relegated to supporting roles that could easily be cut in certain parts of the country. But the actor became a bankable box office presence across regions and audiences, gaining greater access and opportunities for other Black actors in the process. Though his roles were radical—promoting the belief that Black and white folks could work, live, and fall in love with each other—for a later generation he typified a kind of quiet, dignified defiance. While Poitier was dignified, he was never quiet.”

“Roger Ebert beautifully captured the tone of Badalamenti’s score in his four-star review, writing, ‘There are fields of waving corn and grain here, and rivers and woods and little bed barns, but on the soundtrack the wind whispering in the trees plays a sad and lonely song, and we are reminded not of the fields we drive past on our way to picnics, but on our way to funerals, on autumn days when the roads are empty.'”

“Bogdanovich used to call himself a young man in an old man’s business, but he was never really young. He was stuck in the ‘30s, imagining himself next to studio hands like Ford, Hawks, and Dwan, just to the right as they called action. His direction perfectly split the difference between where American dramatic films were going and where they’d been. No one could have done what Bogdanovich did before he did it, and no one will ever do it again.”

“In Michael Mann’s very abstract film, Caan plays a jewel thief who is asked to carry lots of scenes with just a watchful face and cautious body language, and this was all very unexpected since Caan was known for exuberance and a sexuality that was always close to boasting. His performance reveals a disquiet that Caan had never touched on before. Sonny Corleone will be what he is remembered for, surely, but ‘Thief’ should definitely be next in line for remembrance whenever Caan is considered.”

“Fletcher had her own subtext for Nurse Ratched’s relationship with McMurphy, which she revealed to the writer Michael Schulman in a very enlightening 2018 profile for Vanity Fair in which he asked her how she approached this role. ‘She had sacrificed her life for other people,’ Fletcher said. ‘She hasn’t married, hadn’t done this, hadn’t done that, and was self-sufficient on her own leading this life, because she dedicated her life, her earlier life, to other people who needed her.’ Fletcher also thought that her Nurse Ratched was a 40-year-old virgin and was ‘very turned on by this McMurphy guy.'”

“There was a romantic in Godard, but this romanticism was boyishly alien and withholding even in his extreme old age. In all the eras of his long career, Godard makes us aware of film as film and feels no need to create a facsimile of reality for us; his movies are about movies and how life doesn’t measure up. In many of his pictures he plays lush, emotional music on the soundtracks and abruptly cuts it off, as if we don’t deserve it.”

“Gottfried had funny bones. There are few comedians who made me laugh harder. Gottfried, in his CNN op-ed, quoted George Carlin who once said, ‘It’s the duty of a comedian to find out where the line is drawn and then step over it.’ ‘I don’t want to compare myself to George Carlin,’ he wrote, ‘because when I first heard his quote, I laughed and said, ‘He said dooty.’ I guess he was more intellectual than me.'”

“Philip’s voice changed when he was about 12, and suddenly he sounded like an adult. This made him the favorite of his high school teachers who moonlighted as drama teachers. He was in every play as the father, the judge, the man at the end of his life. Hall sounded authoritative while his peers sounded like teenagers. Anyone who’s heard Hall’s voice won’t ever forget it. A voice for movies and a face to match.”

“To think about Anne Heche’s life and career is to contemplate the predatory nature of celebrity culture—how it consumes even its most willing participants, and eviscerates anyone who doesn’t fit the precise mold expected of them. She was a complicated figure, as capable of inflicting harm as she was of receiving it. Hers was a life marred by abuse, mental health and substance issues, and the all-seeing eye of a pop culture that wasn’t ready to treat her love life as anything more than a sideshow.”

“Even late in life he’d play James Tyrone for a week’s worth of performances of Long Day’s Journey into Night at a theatre near his home in Portland, Oregon. He respected the stage more than the screen. At his best Hurt brings the electricity of live theatre acting to the screen. For someone who seemed so sturdy, his gift was in becoming suddenly and overwhelmingly unpredictable.” 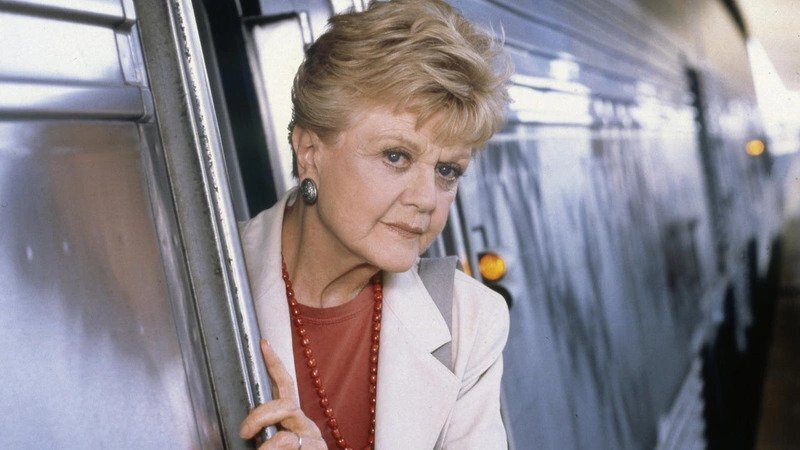 “There was a deep well of emotion in her that she could always draw from, and it only seemed to get deeper and become more mysterious as she got older. Watch her even in the most obscure television episode or movie and there will likely come a moment when Lansbury faces the camera and exposes all the knockout passion and yearning in her soul. She could convey a sense of enormous loss in a way that offered no relief or closure for that loss, and this was the wellspring of her creativity.”

“Ray Liotta was a master of entrances. I know that sounds dopey—every player has their entrances and their exits, as per the Bard—but Liotta crafted some unforgettable ways into a scene. Think about Henry and Karen’s visit to the Copacabana, with Scorsese’s camera following Liotta as he seduces Karen while simultaneously being seduced by the criminal life. Or his first line in that same film, the beginnings of perhaps the greatest feat of cinematic narration ever recorded: ‘As far back as I can remember, I’ve always wanted to be a gangster.’ The way he sells that pitch-black punchline sets the film’s tone.”

“She was ideally cast as the sweet, confused Sandy, singing about holding hands and drinking lemonade. And that is why her transformation at the end, with those iconic skin-tight leather pants, is such a shock. We might disapprove for many reasons of a girl changing her personality and pretending to be ‘fast’ in order to get a boy, but somehow we know she is still sweet Sandy (and resiliently wholesome Olivia) at heart. The poppy love song as they dance through the Fun House and the car flying off into the clouds give the ending a reassuring wink.”

“Lt. Uhura was a fictional Black woman in space, in a time when there were no people of color nor women in space for real. She was fashionable, smart, witty and ran a control panel with gorgeous nails unfit for pushing buttons. She left an impression on us kids—what innocent crushes we had!—and she was played by Nichelle Nichols. Nichols portrayed Uhura for the run of the series, and for the first six ‘Star Trek’ theatrical movies that followed. For any Black kid, or little girl in general, with dreams of being an astronaut, Uhura made the idea a possibility, an aspiration that may not be as far-fetched as we thought.”

“As a writer, director, and producer, he contributed to some of its most notable films, he helped make the career of one of the most beloved movie stars of all time, and he was even a key person behind one of the most successful pop groups of their era. He was a true Renaissance man of popular culture, and the effects of his contributions can still be seen, felt, and heard today.”

“Despite the film’s enormous popularity, Reitman’s contributions to the project have always tended to be underrated when it is discussed. Unlike his previous films, which were relatively modest in size, budget, and ambition, ‘Ghostbusters’ was a hugely expensive proposition that attempted to blend together two things that did not necessarily go together easily—elaborate special effects and broad humor.”

“So a master of his domain was Cicero that a clip just of him preparing a meal in prison and slicing an onion with a razor has been viewed on YouTube more than 67,000 times. One of the most devastating scenes in the film is one of the quietest: when Cicero informs Liotta’s Hill, who was once like a son to him, but now is exposed as a drug dealer, ‘Now, I’m gonna have to turn my back on you.'”

“Jean-Louis Trintignant had one of the archetypal screen faces, a beautiful mask behind which we could see his mind working and judging everything around him. It was a severe face, often impassive or sullen, so that when or if he smiled it was an event. He had a very sensual mouth, but his eyes could seem hard and cruelly appraising, which is why he made his first big international impact in Claude Lelouch’s ‘A Man and a Woman’ (1966) when he looked at Anouk Aimée with disarming tenderness”

“Originally set to design the various animations seen on the computer screens throughout the film, Trumbull’s responsibilities grew right along with the movie’s scope and he would eventually be named one of its four visual effects supervisors. His greatest contribution to the film was the ‘Stargate’ portion, the mind-blowing sequence in which astronaut Dave Bowman (Kier Dullea) is transported through the cosmos in an orgy of wild colors and strange landscapes. Trumbull accomplished this task by taking the basic techniques of slit-scan photography—a process originally utilized to create blurriness in photographic images—and adapting them with the help of custom-built machinery.”

“There is one scene here where Claudia stares in a mirror and begins to make goofy faces, and this comes as a relief amidst so much highly believable anguish and uncertainty. This moment seems to come from Vitti herself, as if she feels the need to inject just a bit of her own humor into the very humorless enterprise of her lover’s masterpiece.”