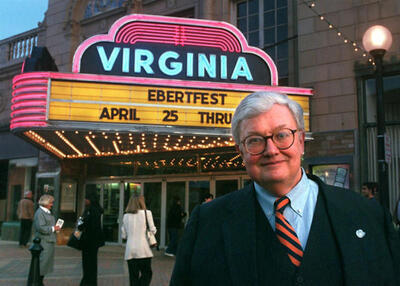 “Movies are a machine that generates Empathy”—Roger Ebert

Roger loved movies for many reasons, but he said that one of the noblest things movies can do for us is inspire empathy by putting us in the shoes of a person of a different race, or age, or social-economic circumstance or gender. Good movies give us a glimpse into the hardships or triumphs of the “other,” and in doing so help connect us to those who are sharing this journey with us. In the end, the hope is that we don’t continue to “otherize” them, but find the commonalities that bind us as a society, community, or nation. And my hope is that in that empathy we will find the moral compass to strengthen the global pact we make to live on this earth in peace.

This was a core belief of Roger’s right up to April 4th, 2013, when he passed away. On this, the tenth anniversary of his death, we will commemorate him at the 23rd edition of Roger Ebert’s Film Festival (“Ebertfest”) with films, events and guests who reflect that principle. While we usually don’t have specific themes at Ebertfest, Dr. Nathaniel Kohn (“Nate”), the Festival Director since the beginning, and I are working diligently with the University of Illinois at Urbana-Champaign, to make this festival one that Roger would have been especially proud of.

We will meet once again in the beautifully restored movie palace, the Virginia Theatre. Roger was an Urbana native who attended the College of Media at the University as a journalism graduate and who became a Pulitzer Prize-winning film critic for the Chicago Sun-Times until he passed away in 2013. He loved being able to show movie lovers films on a big screen with great sound and a community of filmmakers. That experience awaits you this spring.

Roger is not lost to any of us; just as with his beloved movies, he lives on through his artistry, his historical role, his continuing unsurpassed critical influence, and through this film festival. So we hope you will join us,

Passes for this year’s festival, which runs from Wednesday, April 19th, through Saturday, April 22nd, are currently available for purchase at the official sites of Ebertfest and its main venue, The Virginia Theatre, Box Office (217-356-9063) or online by clicking here. Those interested in being a festival sponsor should contact our Festival Coordinator, Andrew Michael Hall (“Andy”) at [email protected]

Twenty Movie Legends We Lost in 2022