The State of the Oscar Race: A Crazy Week Offers Clarity to Key Categories 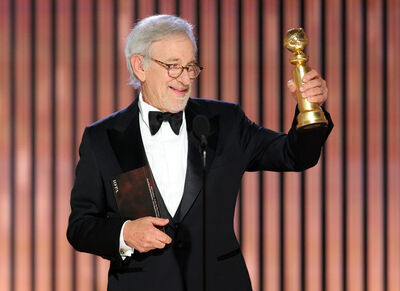 In the span of 48 hours this week, the awards season saw winners announced at the Golden Globes and nominations from the Screen Actors Guild, Directors Guild of America, and Producers Guild of America. While the events affirmed the frontrunner status of some contenders—“Everything Everywhere All At Once,” “The Fabelmans,” and “The Banshees of Inisherin” all had a very good week—it also muddied the waters for potential nominees like Paul Dano, Michelle Williams, James Cameron, and maybe even Adam Sandler. Here’s a brief recap of what went down and what it means.

The Golden Globes Are Back?

The 80th Annual Golden Globes ceremony was broadcast once again on NBC this week after a year filled with controversy. In 2022, the tarnished event was forced to clumsily use Twitter to announce its winners online. But this time, the show returned to its usual venue for a Tuesday night event at the Beverly Hilton Hotel. A wave of celebrities attended once more with Emmy-winning comic Jerrod Carmichael (“On the Count of Three”) hosting the show, but it was an event that wasn’t free of the controversies that have swirled around the Hollywood Foreign Press Association.

TV shows also competed for Globe honors—“The White Lotus” and “Abbott Elementary” were big winners this year—but savvy Oscarologists zero in on the films in contention. At this point, it seems that Steven Spielberg’s very personal “The Fablemans” is the front-runner for Oscar glory after it claimed HFPA trophies for Best Director, Best Original Screenplay, and Best Motion Picture – Drama.

The other front-runner film is Martin McDonagh’s “The Banshees of Inisherin,” which was bestowed with Best Motion Picture – Comedy/Musical, Best Screenplay, and Best Actor in a Comedy for its leading man, Colin Farrell. Cate Blanchett’s Golden Globe-winning role as a haughty orchestra conductor in “TÁR” seems destined to be the front-runner for Best Actress at the moment. As for Best Actor, keep your eyes and ears open for Globe-winner Austin Butler, who brings to life the King of Rock ‘N’ Roll in “Elvis.”

Also picking up speed is the bonkers “Everything Everywhere All at Once.” The most brilliantly bananas movie of 2022 absolutely lives up to its title. Michelle Yeoh kicks all types of butt as a time-traveling laundromat manager in a multiverse of madness. Yeoh rightfully earned Best Actress in a Comedy/Musical and her co-star Ke Huy Quan matched her with a Best Supporting Actor trophy. As a footnote, the actor got to reunite with Spielberg, thanking him for casting him in the role in “Indiana Jones and the Temple of Doom” as a child.

Alas, two actors whose work was nominated this year weren’t present on Tuesday. Brendan Fraser, who was up for Best Actor in a Drama for his movie “The Whale,” stayed away from the awards show. The reason? In 2018, Fraser alleged sexual assault by Phillip Berk, a former HFPA president who is from South Africa. Berk was expelled in 2021 for calling Black Lives Matter “a racist hate movement.”

Then there is Tom Cruise, whose film “Top Gun: Maverick” was nominated for Best Motion Picture – Drama. Cruise would have likely been up for Best Actor, and could land there for the Academy, but he returned his three Golden Globes trophies in protest because of the controversies. The voting members decided to take the petty route and overlooked him.

In terms of timing, it’s worth noting that the Golden Globes winners were revealed on the same day that Academy Award members started casting their nominations ballots for the 95th annual awards. The slate of Oscar contenders will be unveiled on January 24, with the Oscars show set for March 12.

The Actors Have Their Say

The morning after the Globes, the Screen Actors Guild (aka SAG) revealed their choices for the best of 2022. There were few major surprises outside of Adam Sandler complicating the wildly unpredictable fifth spot in Best Actor, Ana de Armas continuing her awards season ascension for “Blonde,” and Paul Dano getting in while Michelle Williams missed (possibly over category confusion given she’s been pushed in lead but many consider the performance supporting). Once again, “The Banshees of Inisherin,” “Everything Everywhere All at Once,” and “The Fabelmans” are the strongest competitors for Oscar right now as their casts accounted for 9 of 20 acting nominations. Here are the key categories for SAG with Ensemble basically being their Best Picture.

Alas, the SAG awards don’t have an on-air TV deal anymore. In May of last year, the association revealed that the honors would no longer air on TNT and TBS. As the nominations were being announced, it was revealed that Netflix would air the awards going forward, but that doesn’t start until 2024. As for 2023, they will air on Netflix’s YouTube channel.

As Natalie Portman notoriously pointed out at the Golden Globes in 2018, “here are the all-male nominees.” Once more, no female filmmakers are in the running for the Directors Guild of America Awards, which announced their nominations on Wednesday. The frontrunners from the Globes and SAG stayed the same with the Daniels (“Everything Everywhere All at Once”), Martin McDonagh (“The Banshees of Inisherin”), and Stephen Spielberg (“The Fabelmans”) getting nominations. Todd Field (“TÁR”) and the somewhat surprising pick of Joseph Kosinski (“Top Gun: Maverick”) rounded out the category.

There is an irony in nominating five males in a year that saw acclaimed work from Sarah Polley (“Women Talking”), Gina Prince-Blythewood (“The Woman King”), Chinonye Chukwu (“Till”), and Maria Schrader (“She Said”), among others. Once again, the DGA members failed to honor any female talent behind the camera. Also missing are James Cameron for “Avatar: The Way of Water” and Baz Luhrmann for “Elvis,” both considered strong candidates for the Oscar category.

While the DGA fumbled in the top category, they made up for it in the first-time feature category, led by Charlotte Wells (“Aftersun”), considered the frontrunner after leading the precursors. Also included were Alice Diop (“Saint Omer”), Audrey Diwan (“Happening”), John Patton Ford (“Emily the Criminal”), and Antoneta Alamat Kusijanović (“Murina”).

This year’s DGA Awards will take place on February 18 at The Beverly Hilton Hotel in Beverly Hills.

Could This Be the Ten?

Finally, the Producers Guild of America chimed in on Thursday morning, revealing their picks for the ten best films of 2022. Again, the three frontrunners were here, with no major snubs and a potential bump for “Black Panther: Wakanda Forever,” “The Whale,” and “Glass Onion: A Knives Out Mystery.” With the Academy nominating ten films this year (after a few years in which it could have been less), the question is if these are the Best Picture ten for the Oscars too or if films like “Women Talking,” “Babylon,” “The Woman King” or “All Quiet on the Western Front” could bump some out.

“Avatar: The Way of Water”
“The Banshees of Inisherin”
“Black Panther: Wakanda Forever”
“Elvis”
“Everything Everywhere All At Once”
“The Fabelmans”
“Glass Onion: A Knives Out Mystery“
“TÁR”
“Top Gun: Maverick”
“The Whale”

Book Excerpt: In the Time of Kiarostami: Writings on Iranian Cinema by Godfrey Cheshire