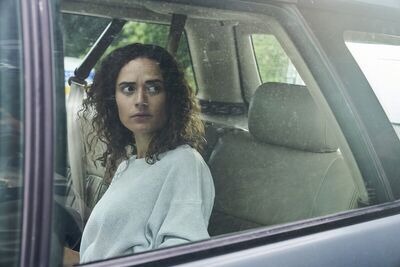 I really wanted to like FOX’s anthology series “Accused.” Each episode tells a unique and unrelated story about a single defendant—what led them to be accused of a crime, their defense, and the outcome—and promises to pose compelling and nuanced moral questions.

In the five episodes made available to the press, the cast is stacked with strong and heartfelt performances. Michael Chiklis, Malcolm Jamal-Warner, and Keith Carradine all play fathers facing parental nightmares with subtlety and grace. Stephanie Nogueras brings heart, frustration, and charisma to her role as a Deaf surrogate who happens to carry a Deaf baby. And J. Harrison Ghee is guarded, smart, and funny both in and out of drag as he tries to find love. Behind the camera, “Accused” has even more well-placed talent with Marlee Matlin directing Nogueras’ episode and Billy Porter leading Harrison Ghee’s.

That should be a recipe for success. But, it turns out that 44 minutes is too few to deliver the kind of nuance “Accused” is after. And without the time to ask complex questions, the episodes are emotionally manipulative–dropping the viewer into terrible situations with no real payoff.

Take the first episode: The liner note says it “confronts the limits of unconditional love” as Chiklis’ Scott becomes increasingly worried his teenage son “may be planning an unimaginable crime.” This is, indeed, an impossible situation with all potential answers already exhausted—Scott has tried putting his son in therapy, adjusting his parenting methods, and involving the police and gotten nowhere. It’s scary and draining to be asked to empathize with Scott, particularly as the episode builds.

But “Accused” has no wisdom to offer. Scott and his family are loving and well-to-do—his son’s propensity to evil is not because of neglect or abuse. In fact, this family has every advantage, and “Scott’s Story” takes pains to show that the elder son is thriving. The explanation of why they’re in this situation—through innocuous flashbacks pointing to something innately wrong in the second son—takes all the teeth out of the opportunity to present a strong social critique. What about incels and the radicalization of young men online? Nothing. Or nearly nothing, as we do see the young man playing shooter video games, surely a throw-back boogeyman with no real teeth. Even the ease of obtaining weapons goes unexamined. This episode asks for a huge emotional lift and its takeaway is that some people are bad. It’s simply not worth it.

And even in the lighter episodes, the format doesn’t work. I’d happily watch Nogueras’ Ava in a whole series, seeing her navigating her abusive mother, building a healthy relationship with her husband, and frankly, just doing more than gestating someone else’s baby. As it is, we don’t see her at work or with a passion project. Instead, we learn only of her alleged crime and that focus reduces her down to her Deaf identity—she’s a Deaf woman, advocating for Deaf rights but not much else.

We do get a larger picture of Harrison Ghee’s Kevin, seeing him at work and at play, but I still walked away frustrated. Why must this powerful, Black gay man be dragged into a courtroom at all? I want to see his happy love story, his coming-of-age tale, not this tale that’s needlessly painful to the audience and the protagonist.

The thing is, the American court system and its individual cases do not and cannot pass judgment on a person as a whole. “Accused” tries to skirt this deficiency, working to assert the humanity of its defendants. But in the short time on hand, the series can’t escape its courtroom framing and so its protagonists end up more as numbers on a case file than complex individuals. And the crimes in each episode, however terrible, do not create intrigue or cause fright. They do disturb, but “Accused” does nothing with the discomfort it causes, making the whole exercise feel cheap and tawdry. What a waste.

The State of the Oscar Race: A Crazy Week Offers Clarity to Key Categories

There’s Something Wrong with the Children