The Final Season of Servant Untangles Its Messy Family Tree 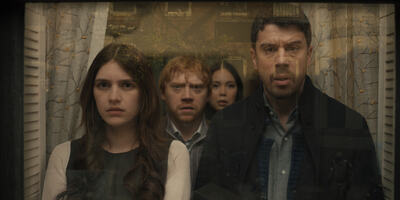 “Everything is decaying,” growls the mysterious Uncle George (Boris McIver) in the season three finale of Apple TV+’s greatest secret weapon, “Servant”: “The house is filled with parasites.”

And indeed, for three seasons of the M. Night Shyamalan-produced show (he directs the occasional episode, and the whole show is suffused with his exacting, Hitchcockian style), we’ve seen plenty of decay in the Philadelphia brownstone that serves as the show’s setting. There’s the literal sense, of course, in that the rotting body of Aunt Josephine (Barbara Sukowa), whom Leanne (Nell Tiger Free) killed at the end of Season Two, has attracted hordes of maggots that are eating away at the Turners’ home. It even leads, “Magnolia”-style, to Dorothy (Lauren Ambrose) falling over a rotting banister in season three’s jaw-dropping cliffhanger.

But there’s also the corrosive nature of their severely messed-up family dynamic, one that Shyamalan, show creator Tony Basgallop, and the rest of the cast and crew seem teed up to conclude in this fourth and final season. Just like each one before it, this season of “Servant” delights in upending the status quo of our not-quite-nuclear family and seeing how it rattles the psyches of everyone involved. The results here, at least in the three episodes available for review, are just as delectable as ever, even if the show feels like it’s rushing to its mandated end.

The first episode, “Pigeon,” brings some of the show’s major plot threads to roost (if you’ll forgive the pun), an almost entirely Leanne-centered episode that also takes her outside the confines of the Turner home for a rare street-level showdown with her former cult, the Church of the Lesser Saints. It’s a staggering work of small-scale suspense, director Dylan Holmes Williams shooing us out of the home into a fumigated street suddenly swarming, zombie-like, with cultists hungry for Leanne’s return. But her mad scramble for survival (including some great setpieces surrounding the Turner’s car, her one bid for safety) soon gives way to another of “Servant”’s brushes with the supernatural; whatever Leanne’s powers are, they’re growing. And whatever grand purpose they’ll be used for, it’s happening soon.

After that largely standalone premiere, “Servant” brings back the Turners and introduces us to the new, queasy status quo for the season. Dorothy returns from a months-long stay in the hospital, bedridden due to the spinal injury she suffered and more suspicious of Leanne than ever before. Sean (Toby Kebbell) has lost himself in the vagaries of celebrity-chef fame; the bits we see of his overwrought TV show, “Gourmet Gauntlet,” are darkly funny reminders that Sean’s detachment and anger push him ever further from his family. Julian (Rupert Grint, always fantastic) has relapsed, trying to figure out where he fits in the family unit, especially since he’s started sleeping with Leanne again.

“Servant” has never been all that forthcoming with its answers, or even its plot, really. Even in its final stretches, I’m hard-pressed to put precisely into words the nature of Leanne’s origins, what or who Baby Jericho is, exactly, or even what kind of apocalyptic scenario the Turners are hurtling toward. Granted, that feels part and parcel of “Servant”’s unique alchemy—a show about the horrors of domesticity and the daily grief of parenthood should lean into that sense of listlessness. But the Turners are just as lost as we are, just trying to make it, as Julian might say in recovery, one day at a time.

It’s easy to stomach these compounding enigmas when the show is shot and performed as well as this, though. Shyamalan regular cinematographer Robert Gioulakis continues to do yeoman’s work, cameras swiveling and unfocusing through asymmetrical framing and disquieting shot compositions to keep us just as off-balance as the characters. Trevor Gureckis’ score builds ever more on the music box-like title theme with ever more layers of discordant synth and atmospheric noises. And the cast, by God the cast; Kebbell’s Sean is more detached from his family than ever, grasping at fame and normalcy with all the verve of an immersion blender. Grint’s Julian remains the snarky outside observer, even as he grows ever more entrenched in their gnarled family tree.

But it’s Ambrose and Free who embody “Servant”’s central war of dueling caretakers, and Season Four throws the most radical wrench in their dynamic. Ambrose’s Dorothy remains a performance for the ages; she’s a madwoman ever bounding between mania and catatonia, broken by grief for what she did to the real Jericho. (Shades of Gena Rowlands’ instability in “A Woman Under the Influence” abound.) Leanne began the show as the mysterious wallflower; now, with her powers, she seeks to supplant Dorothy as head of the family.

While their chemistry always had something of Bette Davis and Joan Crawford about it, Dorothy’s bedridden nature sends it full tilt into “Whatever Happened to Baby Jane?” territory this season, with a healthy dash of “Misery.” Their scenes together are electric, Free’s new, cagey menace setting off new angles for Ambrose’s brittleness to refract. The show’s long been able to balance its off-kilter horror with moments of abject camp, and this season is no different—especially with the late introduction of a pair of elderly oddball nurses, seemingly joined at the hip, to take care of Dorothy (and implicitly act as insulation against Leanne). They feel like vestigial additions to an already-bloated mythos so far, but we’ll wait and see just how much they contribute to the final chapters of the Turners’ odyssey.

There’s no telling just how bonkers “Servant” will get before the end; it’s hard to imagine what new, weird directions they could even pursue at this point. But the show remains committed to the pitch-black kookiness it’s had since its first episode, and whether it sticks the landing or not, I wouldn’t have it any other way. And if it does, it might just go down as one of Apple TV+’s greatest shows.

Three episodes were screened for review.

HBO Confidently Adapts Breakthrough Video Game The Last of Us