Sundance 2023: Sometimes I Think About Dying, The Pod Generation, birth/rebirth 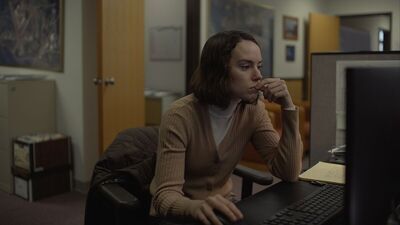 It’s always tempting to look for themes at a festival like Sundance, one that has often reflected the anxieties of the nation with more urgency than some other events simply through the quick turnaround of the indie film scene. And so what do the first three films I screened at Sundance this year say about where we are in 2023? While remarkably different in tone, they all feel to me like stories of people trying to navigate new landscapes, whether it’s the quiet story of a woman trying to open up to the world or two tales of people essentially playing God. As we consider how much we’ve lost in the years between the last in-person Sundance festival in 2020 and this one three years later, I expect to see a lot of films about people trying to find a new road map or draw one of their own.

In a sense, that’s what Fran (Daisy Ridley) is doing in Rachel Lambert’s “Sometimes I Think About Dying,” a dramedy about a woman so quiet that one senses she often goes entire days without uttering a word. Fran lives a life of mundane repetition, following the same routines on her way to and from her job in an office on the coast of Oregon. Her co-workers are a little more outgoing, especially when there’s cake in the breakroom. In an interesting twist, Ridley and Lambert don’t lean into the tropes of depression. Fran seems numb, more introverted and quirky than sad—she’ll proudly tell a group of people that her favorite food is cottage cheese and not even realize that’s a bit of an odd choice—even if she does have daydreams about death.

When one of Fran’s co-workers retires, excitedly telling her co-workers about a cruise to Alaska and giving her office supplies, a new face enters Fran’s life in the form of Robert (Dave Merheje). Outgoing and friendly, he tries to crack Fran’s silence, asking her to go to the movies and out for pie afterward. Is Robert trying to date Fran? It’s not that clear-cut a situation—this is certainly not a traditional rom-com. It’s more just two very different people trying to get to know each other, and Fran realizing that perhaps she’d like to think about something other than dying.

Ridley gives a finely tuned performance in “Sometimes I Think About Dying,” never leaning into the awkwardness of this character that would have been a crutch for a lesser performer. Her smartest choices are in body language, whether it’s in Fran’s posture as she walks or the way she plays with her lip when she’s nervous. She knows it would be wrong for this to turn into a typical Hollywood production wherein a few encounters turn an introvert into an extrovert. She captures Fran’s awkward attempts at friendship in a way that feels carefully considered and true. She’s the reason to see it.

Sadly, the rest of the film doesn’t really hold up around her. It’s one of those projects that one can tell was based on a short or a play because it lacks the cinematic cohesion of a full-length feature film. There’s just not enough to hold onto and Lambert too often seems content to repeat images and ideas without building any sort of momentum. Of course, this is a product of a story of a woman whose life is constantly on repeat and lacks all momentum, but that doesn’t make it narratively satisfying. Eventually, our mind starts to wander as much as Fran’s does at work.

A much different awakening occurs in Sophie Barthes’ “The Pod Generation,” a movie with a fascinating set of ideas but too little POV to drive them home in an interesting way. Barthes raises some original questions about how much our artificial and natural lives are intertwining as we push forward up the evolutionary ladder, but those questions never really shift or change after the first act. It’s a film that I kept wanting to really build on its themes and bite into something instead of merely being content to smile.

Rachel (Emilia Clarke) and Aly (Chiwetel Ejiofor) are a New York couple in what feels like a very viable vision of the future. Tech has become a part of everyday life in every way. The couple’s needs are all met by an in-home A.I. that knows what they should eat, wear, and do that day. Work has become a privacy nightmare with productivity consistently monitored by intelligent machines. Even Rachel’s therapist isn’t human.

In this brave new world, technology has advanced in such a way that couples can use detachable wombs to have children. Imagine the benefit to productivity! And control over nutrients and even the music that the baby hears in this electronic womb. At first, botanist Aly is against the entire thing, but he comes around eventually and joins this tech-heavy vision of parenthood, becoming even more involved than Rachel.

It’s notable that Barthes doesn’t lean strongly on gender roles or the predictable route of the botanist being against the project from start to finish. In fact, she kind of subverts them by having Aly become more involved with caring for the womb, even taking it to the park and refusing to give it back to the very creepy center in which they’re housed. As he becomes attached, Rachel dreams of images of nature and marvels at biologically pregnant women. With these advances that purport to make our lives better, how much is taken away at the same time?

It’s a great question. It’s not quite enough for a full feature like this one. Ejiofor and Clarke are all-in on the concept and Barthes is a sharp writer of dialogue and character beats, but I was waiting here for a third act that never came. Barthes said in the introduction, which included a phenomenal speech about the war in Ukraine by the way, that the film came to her as she was having the weird dreams that come with pregnancy. It feels like a dream—a little too open-ended.

“birth/rebirth” feels more like a nightmare. In a wildly coincidental double feature, Laura Moss’ vicious horror flick works in a sort of conversation with Barthes, again asking what happens when we play God, but the filmmaker here has a much darker vision of that potential. Those squeamish about medical horror need not apply to this Midnight film about two very different mothers, one who is too attached to her medical advancements and one who becomes too attached to a very unique patient.

Rose (a chilling Marin Ireland) is a pathologist who is, politely, socially awkward. Celie (an excellent Judy Reyes) is a maternity nurse. The former sees people on their last day and the latter sees them on their first day. Their lives intersect when Celie’s 6-year-old daughter Lila (A.J. Lister) suddenly dies of meningitis. You see, Rose has been experimenting with curing the one thing that is going to get us all: death.

Moss and co-writer Brendan J. O’Brien give just enough creepy momentum to “birth/rebirth,” knowing that their audience is smart enough to understand that bringing a child back to life comes with a likely set of problems. Moss doesn’t ever really use jump scares, presenting the bloody horror of what’s unfolding in practical terms off creeping dread. We often feel like we’re just in a place that we really don’t want to be, especially as the women discover they’re going to need to do some extreme things to keep their project alive. It’s not quite a new Frankenstein, but it’s a fascinatingly maternal riff on the concept of what we risk when we play with life and death: the very thing that makes us human.