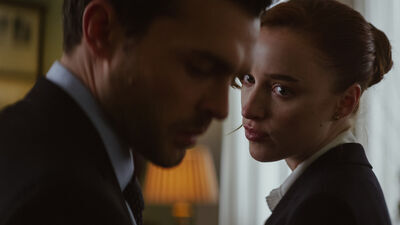 Two of the most divisive films at this year’s Sundance Film Festival center complex and ultimately unsettling gender dynamics, propelled by intrinsically weak men. One deconstructs sex and power in the world of high finance, while the other details the dangers of presuming we can get to know anyone via text messaging alone. They’re both going to ignite fascinating conversations when they’re released, and those are typically the films that last—the ones that get people talking. I think one is more successful at this than the other, but some will disagree. That’s kinda the point.

Chloe Domont’s “Fair Play” was arguably the most-discussed film in Park City this weekend. A searing study of masculine insecurity in a vicious world of soul-crushing sharks, it features a stunning performance from Phoebe Dynevor, well matched with Alden Ehrenreich, doing his best film work in years, maybe ever. This is a confident feature debut that unpacks what happens when the power dynamic shifts in a relationship, and how some people are incapable of shifting with them. Some have argued that it’s a “war of the sexes” piece, and I do think that Domont has some empathy for the male half of this dynamic, but I see it more as an unpacking of male fragility, a story of a man who feels everything he wanted slipping away from him, and so he lashes out at the person he wanted to spend the rest of his life with, and the strong woman who grows increasingly tired of his weakness.

Domont opens her film with a clever scene that really reveals the ingredients of her cinematic recipe: gender, sexuality, and a hidden relationship. After an attempt at intimacy in a bathroom goes awry, Luke (Ehrenreich) stumbles into an awkward proposal to his girlfriend Emily (Dynevor). The two have been living together but have kept their relationship secret because it’s against the policies of the high finance firm at which they work. They get up every morning at 4:30am and take different paths to the office so no one can catch on. Luke doesn’t even tell his parents that he’s engaged. The plan is to climb the corporate ladder to a point where they’re more bulletproof. They will find out this is more difficult when two partners aren’t on the same rung.

After a project manager is ruthlessly fired, Luke thinks that he’s getting the promotion, but it ends up going to Emily instead. When the power dynamic shifts at the office, it starts to eat away at Luke. He takes bigger risks, hoping for a huge windfall. He signs up for shallow online courses about confidence and business strategy. And he seems to cringe when Emily even takes control in sexual situations, feeling emasculated. For her part, Emily becomes more invested in work, trying to impress a cutthroat boss played by Eddie Marsan, and losing all of her work/life divide. She comes home late, and often drunk. Emily and Luke start to drift into separate lives, and neither make much effort to stop it.

Domont’s script for “Fair Play” is a sharp slow burn, a movie that’s very dialogue heavy and yet still plays like a thriller. As Emily and Luke start to get more competitive, their filters in arguments start to fade away and they say the kind of things that change a relationship forever. Domont captures the insanely stressful world of finance with remarkable detail (working on “Billions” probably helped), but the movie really hums in Emily and Luke’s apartment. Ehrenreich deftly captures the kind of guy who knows exactly what to say about not being jealous, even he doesn’t quite believe it as it comes out of his mouth. This is a guy who has been working for this job his entire life, and he’s seeing someone else get there first. He’s too shallow to figure out how to reconcile his frustration at work with his love for Emily, especially when they’re so connected.

As good as Ehrenreich is here, the movie belongs to Dynevor. She has to go to some dark places, and everything about “Fair Play” falls apart if we don’t believe her journey. The way she balances trying to impress the colleagues on her new tier of her profession with her awareness that things are falling apart with Luke is riveting. Domont never explicitly turns the film into a feminist screed, but the point is made through the plotting that the other promotion managers don’t have to worry about a jealous man at home. Emily has to pull Luke up the ladder and maintain her grip on it at the same time. And he doesn’t make that easy. Dynevor, a star of “Bridgerton,” is the pulse of this fascinating film and she knows how to make it beat.

Less successful overall, “Cat Person” may actually end up being more popular. It’s got bigger names and an undeniable hook. So it’s too bad that it feels a bit overwritten throughout, but especially in a final act that adds crazy twists to the viral New Yorker short story on which it was based. “CODA” star Emilia Jones (also here with “Fairyland”) proves again that she’s becoming one of the more interesting actresses of her generation, and “Succession” star Nicholas Braun makes some very interesting choices that keep his character effectively vague, but director Susanna Fogel (writer of “Booksmart”) and writer Michelle Ashford are too keen to underline, highlight, and shout their themes instead of incorporating them into an effective narrative.

Jones plays Margot, a 20-year-old college student who lives with a supportive friend (Geraldine Viswanathan) and studies with an eccentric teacher played by Isabella Rossellini. Some nights, Margot works the concession stand at a local theater, where she spots a regular named Robert (Braun). The two flirt a bit over Red Vines, and he gets her number. They begin a text-heavy relationship that seems to be going well. They’re playful but not overly flirtatious until Margot sends a sexy pic on a trip home to see her parents (including Hope Davis). At first, Robert doesn’t respond. After he finally does, and after a disastrous half-date that leads to a locked door, the two go on a real first date. It does not go well. “Cat Person” contains one of the most awkward sex scenes in film history, a sequence in which Margot literally has to converse with a version of herself in the room to get through it. When Margot tries to end things after the worst date ever, well, it gets bad.

Despite some very funny lines and buoyant filmmaking, no one could ever mistake “Cat Person” for being a traditional rom-com. It has the air of threat in it from the very beginning as young women have to constantly be concerned about how the man they’re flirting with could be a serial killer. It opens with the Margaret Atwood line: “Men are afraid that women will laugh at them. Women are afraid that men will kill them.” And that’s very clearly the driving force here as Margot has to constantly question if she really knows Robert, and what it means if her instincts are wrong.

A bit too clearly. There’s a version of “Cat Person” that doesn’t feel like it literally has to put the Atwood line on the screen, and the final scenes that get even more explicit had a lot of people at Sundance groaning. Without spoiling, the short story is really just a two-act piece and the film needed to go somewhere else for a climax…and so it GOES. And yet I don’t hate the ending as much as some people. I don’t think the choices derail everything entirely, and Fogel really kind of writes the film in a way that makes it impossible to go anywhere else. Ultimately, Jones and Braun kept me in the film to the end in a way that I was never bored, even if I kept thinking about how the film around them doesn’t quite live up to what they’re delivering.