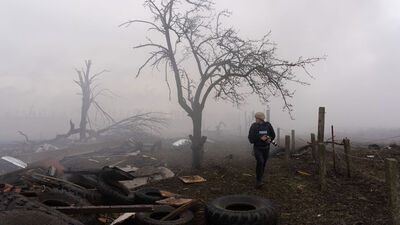 In the early weeks of its invasion of Ukraine, the Russian Federation claimed that it would not be attacking civilians. We know this to be not true, especially in the city of Mariupol, because of what Associated Press correspondents like filmmaker Mstyslav Chernov, field producer Vasilia Stepanenko, and still photographer Evgeniy Maloteka captured while trying to survive themselves. Whenever they could get a signal, their stills and video footage were broadcast around the world during the city’s siege in March 2022, along with narratives that newscasters used in sound-bites—houses destroyed and lives lost from blatant war crimes. Because of them, we know specific examples of the war crimes inflicted on the people of Mariupol; we know the names of the dead and the age they died. We have this footage of dead bodies, mass graves, and a bombed-out maternity ward to prove against what Russian officials have written off as “fake news.”

“20 Days in Mariupol,” premiering as part of the festival’s World Cinema Documentary competition, is the feature-length compilation of what they captured, presented here as a journalist team’s first-person experience into those war crime zones. We see Chernov capture footage in a hospital of maimed young people dying on gurneys. Then later the documentary shows us how it became part of the news, sometimes with “Graphic Imagery” warnings. No gruesome sight is unfilmed in the process; there is a great amount of suffering, blood, and/or terror in nearly every sequence of “20 Days in Mariupol.” As Chernov’s somber narration states when recounting the day-to-day experiences like reading journal entries in darkness: “This is painful to watch. It must be painful to watch.”

The harrowing, unshakeable footage is written, directed, and filmed by Chernov and edited with effective succinctness by Michelle Mizner; it is made all the more effective by how it takes a series of chaotic events and makes it work with a documentary’s chronological narrative. Chernov’s voiceover stitches all of these memories together, and he sometimes shares what he has heard from others living in this war zone. One doctor told him how war makes “good people become better, and bad people worse.” We see that become evident as the people of Mariupol struggle for food, power, safety, medical supplies, and more.

This is the only footage from this experienced captured by the international press. “Film so the whole world can see this chaos,” Mariupol citizens yell as they are pushed into a horrifically uncertain future, mourning the loss of loved ones. Getting the footage out of the city as it is under siege—so that we can see the very documentary we’re watching—becomes something else to appreciate about this harrowing miracle of a film.

One must be careful with any degree of sensationalism when recommending “20 Days in Mariupol,” as it is an incredible, and haunting viewing experience that also makes one viscerally aware of just how much more traumatic it would be and was in first-person. But journalism of this high order—equally heroic and selfless—can bridge that gap, and preserve lives with the power of shared information. To call “20 Days in Mariupol” one of the most important movies of Sundance is to undersell it, but we can hope that the festival, its attendees, and later the rest of the world will see it (PBS Frontline produced the movie). “20 Days in Mariupol” will undoubtedly be one of the most important films we have about understanding the conflict and its effects on the people of Ukraine, and it is a rousing call for attention and support that must be given.

Also premiering in the festival’s World Documentary Cinema competition is Jakub Piatek’s “Pianoforte,” which offers a fly-on-the-wall look at the International Chopin Piano Competition and emotional space for its young contestants. The competition has been running since 1928 and is considered the “piano Olympics,” which are introductory stakes for this pleasant and eventually resonant documentary. The film was made with the full participation of the contest but counters any worry at free advertising with its sincere depiction of bright youth struggling against standards set for them nearly 100 years ago.

Culled from the initial dozens of young hopefuls invited into the contest, we know a handful of people and their nerves, hopes, and behind-the-scenes feelings in close-up. There’s Marcin, who factors in his facial expressions into his practicing, or Leonora, who maintains a rich giddiness about piano playing (even when sneaking in a Metallica cover at a nearby social event). Without making too much of a point, but allowing the focus to build gradually, it also becomes about noting the support they have from others—Eva has the most intense teacher, compared to the guidance of Hao Rao, who has known him since he was a child and jokes at one point that she wishes she was his mother.

For the first half or so, the documentary almost spreads its collective charisma too thin by jumping between these different lives that hardly interact with one another. It’s here that the work to create multiple mini-arcs seems counterintuitive; the movie can cut away before getting too involved with a particular story. And there’s something to be said about how the doc doesn’t identify the pieces being played, or help the non-Chopin-familiar understand what is good and wrong, an element that usually helps an audience follow a competition story like this.

But something within the story changes when it has fewer musicians to focus on by getting to the end—the sound mixing even takes on more of a fictional feature’s approach, like when it drowns out two adults as they speak over Eva in the middle, progressively worn-down. Another sequence shows the remaining contests rehearsing a concerto that will decide their fate, match-cutting their hands in close-up and blending their versions.

One might be tempted to lump in “Pianoforte” with previous Sundance docs that have followed teenagers in competitions—“Science Fair” and “Try Harder” of recent—but “Pianoforte” has a distinct bittersweetness that makes it more introspective, if not quietly haunting. It becomes apparent, watching these virtuosos who labor for hours a day over 12 notes, how the contest quandary haunts them—to have wisdom about concertos and etudes that have lived many more lives than they have. Piatek captures how these contestants grow up too quickly just to stay in the contest, casting a unique but bleak light on art’s fixation with cultivating prodigies.