10 Major Snubs and Surprises from the 2023 Oscar Nominations 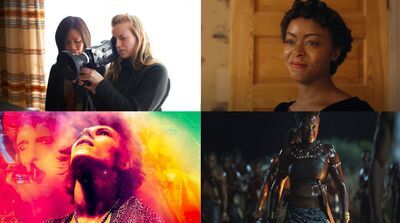 Happy Oscar morning! As usual, the Oscar nominations bring numerous reasons to celebrate, yell, laugh, guffaw, and shake your damn head, and this morning is no different. The loudest gasps this morning were likely for Andrea Riseborough, who came from nowhere last month to launch an unstoppable Oscar campaign for her indie film “To Leslie” that was unlike anything we’ve ever seen. Seemingly every major actress in Hollywood has been unable to contain themselves from tweeting about her performance and talking about it from the red carpet over the last few weeks, and one of the biggest questions of the day was whether it would all pay off.

In the days to come, videos of nominees hearing their names get called will start to circulate online, and particularly with the short film, international film, and documentary races, these videos are beautiful, contagious, and seem to immediately justify the whole Awards Industrial Machine that drives us all so crazy year after year.

But right now we haven’t seen those videos yet, and sharing in that ecstatic joy feels far off in some theoretical future. No, right now is for outrage. Oscar nominations morning always feels a bit cruel in the moment, when what doesn’t get announced somehow feels so much louder, so much more real, than what does.

It’s important to remember that no movie you love is any different today than it was yesterday. It’s still there for you, eagerly awaiting that next rewatch. But a lack of Oscar nominations does mean that, perhaps, fewer eyes will find their way to these movies over the next few months. Here’s a list of some movies and performances that we’re suddenly sad might not be watched by as many people as they should have been.

Danielle Deadwyler for “Till“

Unfortunately, Danielle Deadwyler wasn’t the only Black woman to surprisingly (and problematically) be left out of the Best Actress slate. Viola Davis also fell out of the lineup, and in her case it’s even more shocking, because Davis had already been nominated by every major precursor award (BAFTA, SAG, Critics Choice, and Golden Globes). Davis’ snub was the final nail in the coffin for “The Woman King,” Gina Prince-Bythewood’s wonderful period epic that earned raves when it premiered at the Toronto International Film Festival and then surprised pundits with a strong box office performance last September. But, bit by bit, the film seemed to lose steam throughout the long awards season, and despite also being considered a likely contender in several craft categories (its costume design remains breathtaking), it ultimately failed to secure a single nomination this morning.

“The Woman King” was one of several female-helmed films that could’ve conceivably been nominated for Best Director, along with Sarah Polley’s “Women Talking,” Maria Schrader’s “She Said,” and Charlotte Wells’ “Aftersun.” Though it was widely expected that we’d end up with an all-male final five this year, it still feels like a cruel snub given that the last two Best Director winners were both women (Jane Campion won for “The Power of the Dog” last year and Chloé Zhao won for “Nomadland” two years ago). It’ll be several more years before we can tell which was the historical anomaly—this year’s all-male lineup or three women receiving Best Director nominations in the two years prior—but one can hope this might be the last slate of five men vying for this award that we see for quite some time.

Also of note in the Best Director lineup is that all five nominees are up for arthouse films, and despite three massive blockbusters making it into the Best Picture lineup (“Avatar: The Way of Water,” “Elvis,” and “Top Gun: Maverick”), none of the men who made those films were honored in the Best Director field. This is particularly surprising given how much Oscar voters allegedly care about ratings for the show, something that a “James Cameron versus Steven Spielberg” narrative might have helped drum up if they were both in the running for Best Director (none of their many previous nominations had come in the same year). But even though “Top Gun: Maverick” director Joseph Kosinki made the lineup of five nominees from the DGA, the far more esoteric AMPAS Directors Branch kept this lineup an arty affair.

Janelle Monáe for “Glass Onion: A Knives Out Mystery”

While “Glass Onion: A Knives Out Mystery” can’t entirely be included in the blockbuster conversation—because Netflix only put it in theaters for a week, didn’t report grosses, and doesn’t reveal how many people have watched it—it is, at the very least, a hugely popular crowd pleaser, and like the first “Knives Out” movie three years earlier, it’s Oscar morning hopes were mostly dashed, and it had to settle for a lone nomination for its screenplay. But in the case of “Glass Onion” it’s much more surprising, because it was considered a good bet to show up in several races, most notably for Janelle Monáe’s movie-stealing turn as a woman who provides one of the most karmically delicious comeuppances any billionaire (fictional or otherwise) has ever received.

The Best Supporting Actress race actually provided several surprises, and Dolly De Leon missing out was another one of the big ones. It had been reported for months now how much Oscar voters loved “Triangle of Sadness,” and the most obvious place that love was expected to manifest was with De Leon, who stole the show as a resourceful woman who discovered a new, addictive kind of power amid extreme circumstances. One of the most obvious takeaways from this morning’s nominations is that voters did, indeed, seem to love “Triangle of Sadness,” and it received somewhat surprising nominations in several major races, including Best Director (for Ruben Östlund) and Best Picture. And yet, Dolly De Leon didn’t benefit from this love.

The Ensemble of “Women Talking”

The supporting acting races have been among the most volatile categories for pundits all awards season, mostly due to an overabundance of great options. Nowhere is this more obvious than with the cast of “Women Talking,” who managed to score a Best Ensemble nomination with the Screen Actors Guild a few weeks ago but couldn’t secure Oscar nominations for any individual members of that incredible ensemble. This isn’t quite as surprising with Best Supporting Actress—long considered the year’s deepest race—where Claire Foy and Jessie Buckley likely cannibalized each other’s votes. But it’s more surprising with Best Supporting Actor, where Ben Whishaw (basically the only man in the film) seemingly had a clearer path to a nomination. Whishaw has been one of our most underrated actors for a long time, and he’s still awaiting his first Oscar nomination.

Paul Dano for “The Fabelmans“

Somehow, improbably, the same is true of Paul Dano, who’s had Oscar buzz for several previous roles (most notably “There Will Be Blood”) and has been nominated at least once in his career by every other major awards body but is still awaiting his first Oscar nomination. His touching performance as Steven Spielberg’s father (sorry, I mean “Sammy Fabelman’s father”) in “The Fabelmans” was the steady, stoic heart of the film. His Oscar hopes were dashed and his subtle work in the entirety of the film made less of an impression with voters than that of his co-star, Judd Hirsch, who is only in the film for one sequence that lasts less than ten minutes. To be fair, Hirsch shines in every second he’s on camera, and is even granted a highly memorable entrance and exit from the screen. Apparently, that was enough to rip out the hearts of Dano fans.

Brett Morgen’s hypnotic collage film about David Bowie shocked pundits last month when it made the shortlists for not just the Best Documentary Feature race, but also for Best Sound, becoming one of the rare documentaries to potentially get recognized in another Oscar race. But alas, it wasn’t to be, and “Moonage Daydream” ended up missing out in both races. This is less shocking for Best Sound, which went with the usual suspects (war, action, and special effects) for its final five. But it’s unfortunate that the film also missed out in the Best Documentary Feature race, and sadly this seems to keep happening to Morgen, whose 2017 film “Jane” was considered the presumptive frontrunner for the Best Documentary Oscar before also failing to secure a nomination.

We’re saving the best, or perhaps the snubbiest, for last. Few films were a staple on more critics’ Best of 2022 lists than Park Chan-Wook’s dazzling neo-noir, which won Best Director at Cannes and earned Chan-Wook a Best Director nomination from BAFTA just last week. After “Parasite” broke the inexplicable barrier that Korean cinema had been facing with the Oscars for their entire history, we collectively thought the shroud had been lifted, and one of the world’s most consistently wonderful cinema hotspots would finally start regularly receiving its Oscar due. But it was not to be this year, and even though “Decision to Leave” had been considered one of the top contenders in the Best International Film race all year, it ultimately proved too smart and elusive to even secure a nomination.

Nominations for the 95th Academy Awards

Performance by an actor in a leading role

Performance by an actor in a supporting role

Performance by an actress in a leading role

Performance by an actress in a supporting role

Achievement in makeup and hairstyling

Best motion picture of the year