Sundance 2023: Against the Tide, Smoke Sauna Sisterhood, 5 Seasons of Revolution 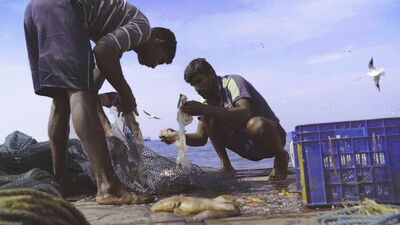 In the World Documentary Competition, three films center on cultures in flux. In Sarvnik Kaur’s ecological plea “Against the Tide” two fishermen from Bombay feel the tension of tradition versus modernity as overfishing threatens their way of life. In Anna Hints’ “Smoke Sauna Sisterhood” the cleansing power of Estonian sauna culture coupled with a sense of community it cultivates helps women overcome generations of inherited trauma. Lastly, in Lina’s “5 Seasons of Revolution” a freelance video journalist chronicles an activist group during five years of the Syrian revolution.

A baby cries and a chant is heard: “Tides turn, fear not. Winds howl, fear not. A Koli knows no fear.” This chant will be repeated throughout Sarvnik Kaur’s meditative doc “Against the Tide” about two indigenous fishermen from Bombay whose lives have taken decidedly different paths. Rakesh, who has never left Bombay, lives with his mother, his wife, and their two children (it’s his newborn in the opening sequence) in a humble home that has just been upgraded with running water. Similarly, his boat is old-fashioned, and he follows traditional fishing practices. In contrast, his childhood friend Ganesh, who studied in Scotland, lives with his wife in a fancy apartment and uses outlawed LED lights to deep water fish.

Both are struggling to make ends meet, Rakesh because of the cost of treating his newborn’s illness and declining prices offered for fish, Ganesh because he has loaded himself with debt in order to pay for the LED lights, his boat, and his crew. Although the two see themselves as brothers, their worldviews vary distinctly. Rakesh desperately tries to explain how LED lights are hurting the environment, that overfishing—even if done in the deep sea—hurts everyone. Ganesh is so entrenched in a capitalistic outlook that he cannot see why Rakesh even cares about deep-sea fishing if he doesn’t plan on ever taking part in it.

While the blurb on the Sundance website suggests that “neither man is hero or villain in the choices they make,” it is hard to watch Ganesh constantly make selfish decisions without a thought for the future, while Rakesh always seems to make decisions rooted in the morality of ancient traditions, never succumbing to wild ambition when contentment is within reach. At one point Ganesh says to his friend that the shallow sea where he makes his living is “a shit hole” and Rakesh replies, “Money has made you arrogant.” As an American viewer, it’s hard not to read reverbs of Trumpism into this heated exchange.

It’s also hard to see the tone of film as even-handed between the two men when Kaur ironically underscores a sequence where Ganesh takes out an $18K loan for LED lights and then another $120K loan for another boat with the “A Koli knows no fear” chant. It’s clear in this portrait of these two men that there is no place for ecology when operating within capitalistic goals. Yet, because we are all stuck within capitalism, a family like Rakesh’s must choose between their boat and getting the money to pay for medical care. In the end, capitalism is the villain, sure, but there is always a chance to strive for keeping your morals while operating in it.

Similarly, Anna Hints begins her documentary “Smoke Sauna Sisterhood” with a chant and the cleansing of a baby. The tradition stems from the titular smoke saunas of the Võro community of Estonia, which are part of UNESCO’s list of Intangible Cultural Heritage of Humanity. In this meeting space, women gather in the nude to not just cleanse their bodies but to cleanse their souls.

Hints films a group of women over a few seasons, roughly the length of one woman’s pregnancy, as they meet and exchange their most vulnerable selves. These discussions include working though body image issues borne from the casually cruel comments of their mothers; stories of inherited traumas from the women whose lives for generations have been boxed into sticking it out in unhappy marriages full of emotional and physical violence; and discussions of a woman’s right to choose an abortion.

Through many of these confessions Hints holds her camera steady on the storyteller, but for others the trauma runs too deep and instead the camera holds on the faces of those bearing witness. Interspersed throughout are body parts—arms, legs, stomach folds, breasts—of every conceivable body shape and size, photographed with affection. Hints frames bodies with light, creating a chiaroscuro effect akin to oil paintings. Additionally, laughter of recognition rings throughout, whether the confessor shares a horrible dating app experience or something much grimmer. It is through this laughter these women find the fibers deep inside themselves that connect them to each other.

One harrowing sequence that lasts at least five minutes, shown without a single cut, sees a woman telling a story of how she was raped as young teenager and then assaulted again that same night. She recalls each moment from this terrible night with exacting detail, both of the events as they occurred, and her emotional state during and after. She ends her tale with a plea: “I want to protect my daughter from all of this, but how can I?”

Even in the modern world, women often find themselves attacked by the same violence and traumas of their foremothers, just in new ways. But if this cycle must continue, so, too, must the healing process. This is why sacred places matter. This is why community matters. The strength of knowing others understand your pain can help fortify you deep in your soul. This is the heart of Hints’ bittersweet yet empowering film.

Chants take on a different meaning altogether in “5 Seasons of Revolution,” as demonstrators call for a united Syria, the end of killing, and in some cases are forced to celebrate Syrian president Bashar in order to gain freedom from detainment. Director Lina, who uses the moniker for anonymity purposes, chronicles the lives of her friends as they band together to form an activist group. Lina uses footage shot from 2011 through 2015, some documenting their political discussions in the safety of their apartments, as well as harrowing on-the-ground footage of beaten protestors, army tanks, and even the aftermath of bombshell-ravaged neighborhoods.

Lina sets the story by telling of the Hama Massacre, which occurred in 1982, a year before her birth. Through a series of slideshows, we learn about her life and her path to independent video journalism. Lina’s voiceover narration gives the film an essay-like quality as she describes the events with the kind of insight that comes with distance. The film is split between the titular five seasons, beginning with the hope her cohorts felt during the Arab Spring, with violence and hopelessness escalating through each further season.

In telling these stories, Lina often employs deepfake technology and facial blurring to ensure anonymity for those who may still be in danger of retaliation, which could come solely for telling what they’ve witnessed or for organizing a strike. One member of the group is detained due to a joke made about the president. The matter-of-fact way Lina shares these details serves as a humble reminder of what we in America take for granted every day.

“I missed clarity,” Lina declares as her group dissolves after the death of one member, the incarceration and later immigration of another, and the radical difference of opinion on how to keep moving that drives a wedge between two others. As Lina comes to realize that there is no place left for her in Damascus, she also points the film’s gaze directly on the world that sees what happened in Syria as a burden; those who have fled the violence a “crisis” imposed on others. “They say that democracy is not for everyone,” her voiceover reads, a damning indictment of a failure on a global scale to help those on the ground. She may no longer be able to report what she’s seen, but she’s able to tell this story one last time.