Yellowstone Prequel 1923 Gets Off to a Slow Trot 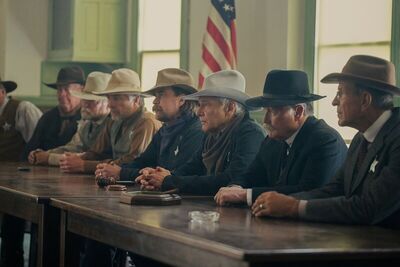 It’s astonishing to see the grip Taylor Sheridan has on a specific subset of the American public, and I can’t say I blame them. His hit series, “Yellowstone,” is the backbone of Paramount’s TV network, rivaled only by the ever-expanding galaxy of “Star Trek” spinoffs that come out every other month. But where “Trek” appeals to nerds, “Yellowstone”’s revisionist Western trappings (mixed with old-school movie stars and prestige sheen) are catnip for Midwestern dads who want something that feels like what they grew up watching, but More Sophisticated. It’s a formula that works, which means more spinoffs charting the serpentine trail the Dutton family has blazed across the American West.

Like the franchise’s previous prequel, the excellent “1883,” “1923” looks to fill in another chapter in the clan’s fragile attempts to build a new American empire in the hills of Montana and does so with some of the biggest stars the series has attracted yet. Here, the baton has been passed to Harrison Ford and Helen Mirren, two of the most venerated actors of their generation; it’s bizarre to see them here, in a spinoff of a spinoff of a streaming series. But they sink their teeth into the material they’re given, even if the little we’re given of them thus far offers scant indicators for how the rest of the show will fare.

Though its title scheme befits “1883,” “1923” is much more “Yellowstone” in tenor; where the former followed James Dutton (Tim McGraw) and his family on their way to what would become the Dutton ranch, “1923” sees it fully settled and thriving, with James’ brother Jacob (Ford) now in charge, with his wife Cara (Mirren) keeping everything running smoothly.

But where Duttons make camp, violence and trouble always follow them: the land is beset by drought and locusts, and the cowboys and sheepherders that occupy the region are at each other’s throats for what few resources are left. In the show’s opening moments, we’re treated to Mirren chasing down an unnamed intruder with a double-barrel shotgun, unloading on him, and screaming into the air. “Violence has always haunted this family,” “1883” character Elsa (Isabel May) coos in voiceover; whether human or animal, we get plenty of that before the first episode is through.

Over the premiere, we see how far that violence follows the Duttons, even halfway across the world. Sure, we spend the bulk of our time with Jacob and Cara, though hardly enough to let Ford do more than his signature late-life growling. (He cuts an imposing, iconic figure in Westerns, to be sure, but his stoic nature here hews close to stiffness.) Mirren’s far more dynamic, trading barbs with Jacob and offering sage advice for her grand-nephew’s fiancée (Michelle Randolph), forced to learn the secondary place women have in the lives of ranchers. “You have to want more than the boy,” she intones with an Irish lilt. “You have to want the life, too.”

But the premiere also throws us into two other major storylines, one of which is far more interesting than the other. In Africa, James’ younger son Spencer (Brandon Sklenar) hops around the continent, building a reputation as a big cat hunter; he occasionally thinks back to his time in the Great War and how it hollowed him out. He’s chasing a part of himself he lost and hopes to find it in the jungle, Hemingway-style. So far, it doesn’t impress, especially given the dodgy CG effects we see of the lions and leopards he hunts.

The other plot thread offers more potential, following an Indigenous woman named Teonna Rainwater (Aminah Nieves) straining against the confines of the government-run religious school she’s forced to attend. She bristles against assimilation, enduring varying levels of torment from her sadistic teacher (Jennifer Ehle) and Father Renaud (Sebastian Roché), who wields his own kind of violent power against both women. All three performers are phenomenal, and these scenes are shot with an irresistibly potent tension. It just feels like it should be its own show.

And that’s the rub with evaluating “1923” by its pilot alone; so much real estate is spent setting up characters and juggling three seemingly distinct storylines that we don’t get a chance to know anyone or anything very well by the end. But there’s potential galore to be found in its place-setting, especially if you come to the series fully armed with a working knowledge of the Dutton family tree.

Sheridan’s script continues his flair for blending the majesty of the American (or, here, occasionally Africa) wilderness with the horrific possibilities that await those who occupy it. Mirren tells her new young charge that, despite the loneliness of ranch life, she will “be free in ways most people are not.” What Sheridan, and the whole “Yellowstone” experiment, proposes is that this freedom comes at a violent cost. We’ll just have to see who’s left standing by the time the gunsmoke clears.

The first episode was screened for review. “1923” premieres on December 18th on Paramount+.