The Sage, The Crone: Judith Ivey on Her Role in Women Talking 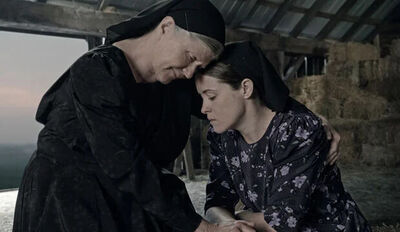 The cast of “Women Talking,” written and directed by Sarah Polley, faced several challenges when adapting the book by Miriam Toews. First, it takes place almost entirely in one setting, with a varied group of characters trying to decide on behalf of all of the community’s women whether they will do nothing and continue to accept the abuse of the men, insist that the men apologize and change their behavior, stay and fight, or leave. The women have been kept ignorant of the world and cannot read or write. So the performers had to find the right tone for a dialogue-heavy script, heightened but accessible. In an interview, Judith Ivey talked about her character’s purpose in the story and why she will always return to theater work.

What did Sarah Polley do to keep the film from feeling static or talky?

Well, certainly a story like this you wouldn’t expect the car chase, right? She didn’t really talk about it that much. She did talk about the staging and how she had ideas to have it be a lot more fluid than one might expect given the fact that we are just sitting around talking. But it was just a given that this was the way these women behaved. And this is, first of all, a secret meeting. So, it was much more about the intensity and the idea that the clock was ticking before the men came back from town. I had great respect for that because that gives you something to play with rather than, “Let me just lecture you on how I feel about the situation.”

How would you describe your character and her relationship to the other characters?

She is obviously the rational one, the grandmother of the group, so to speak, the sage, the crone, as we would talk about in mythology. She is incredibly fair and wants to hear everybody’s opinion.

I tried to play that she wasn’t necessarily sure about leaving in the beginning, that she really did welcome this debate, this conversation, and that we would all be better off by talking about it rather than one person dictating. That is why Francis gets outvoted right from the top of the movie. She just wanted to tell everybody to do what she thought they should do. And then when the vote happened, they didn’t follow suit. It’s a great story about democracy. These women have never voted on anything when the story starts, or even been asked what they want. It’s a new adventure for them. And for me, the role of Agatha was to make sure that democracy was there, that there was a sense of equality for everybody.

This group was selected to be representative of the larger group of women. Why do you think your character was one that the large group thought was going to be very valuable?

We did talk about a back story because it’s not necessarily even in the book that Miriam Toews wrote. The suggestion was that perhaps, since my two daughters are so vocal and really in many ways the polar opposites, there must have been a kind of balance in our family. And what happened to my husband, where was he? We decided that possibly that we were a family that questioned what the elders told everybody to do, not unlike August’s family who were ultimately expelled.

Obviously, that didn’t happen. We stayed. But my husband’s dead. And the leadership he may have had was passed on to me in a way, not the elders. Clearly, I’m still a female, but I had a kind of place in the community.

And the same with Sheila McCarthy’s character. The same with Frances McDormand’s character. The three of us represent three different families and clearly as established in the book and then carried on to the screenplay, are regarded as representative of the vastness of that community. It made sense to me that my daughters wanted to either leave or wanted to stay and fight that they would never have voted with Scarface’s suggestion that we accept and forgive.

That would mean the status quo would continue and the women would have to continue to forgive.

Exactly and allow for the same abuse of power and personhood to go on and repeat itself.

Let me back up a little bit and talk about you. You’ve had such an extraordinary career, including two Tony awards. Can you say something about the difference between being in a play and being in a movie?

I will admit, first and foremost, I’m a theater snob. It’s where the actor runs the show. And so, I get to run the show when I’m in the play. More so than a film. For me, the difference is there’s no audience there when I’m doing a movie. The audience are my colleagues, and my colleagues range from the crew to the rest of the cast. And their job is to be performing right along beside me, not to be sitting there enjoying me necessarily. And so, that’s the hardest part for me.

When I started doing film 100 years ago I did mostly comedies. And so, to not have an audience I started trying my best to crack up the crew. And since they couldn’t laugh out loud if I saw somebody grab their mouth and turn away because they didn’t want to laugh on the soundtrack I thought I succeeded. I had to wean myself off that in a way with the more dramatic films I committed to because I was still waiting for them to somehow have some participation in the moment. That’s really the difference to me. The acting stays the same.

And what was your first professional acting job?

My first one was an Oscar Mayer bologna commercial where I was climbing a cliff with my boyfriend and was terrified and he lowered down an Oscar Mayer baloney sandwich and I cheered right up. And that was the very first paid job I did. And then the first paid theater job was a little more, let’s say, intellectual play called The Sea by Edward Bond at the Goodman Theater in Chicago.

Was there a movie or a play that you saw when you were young where you said, “That’s it for me. That’s what I am going to do”?

I always thought I was going to be a visual artist. So, even though I was succeeding as an actress I didn’t take it very seriously, and I’m sure a lot of actors would like to punch me in the nose saying that. But I thought, This is kind of a fluke. This isn’t going to be a career for me. I really wanted to be a painter. And then I guess the first time my parents took me to see Carol Channing in Hello Dolly in Chicago, and when she had her dinner scene where she stuffed her mouth full of stuff, I think it ended up that it was cotton or something. You can’t believe how much she puts in her mouth. I thought that was the funniest thing and the most brilliant performance. That kind of hooked me. I thought that was so much fun.

Sarah Polley, of course, began as an actress, when she was a child. What is it that she knows as an actress that helps her be a good writer and director?

She is completely sympathetic to what your job is, and she respects everything from how many people are on the set to how much time you need to get ready to do this moment if this is upsetting for you. She had a psychologist who was there during the shooting in case anybody really just couldn’t go on because of the nature of what we were talking about and how upsetting it was. To the opposite of that, she has fun with it, she gets silly about it. And so, she doesn’t take it so seriously that there’s no perspective. She’s just a performance animal. I guess because she started so young it’s in her bones at this point.

During the pandemic, what did you do to keep yourself happy and occupied?

Well, as I said, I’m a painter so I was painting. I was making quilts. I’m very crafty as my girlfriends call me. And so, I have a constant project going on. I did one too many Zoom performances. At Christmas, I think I was in three different Christmas Carols. I think I played all the ghosts.

“Women Talking” will be available only in theaters on December 23rd.