The Rig Digs For Crude, But Effective Eco-Horror Thrills 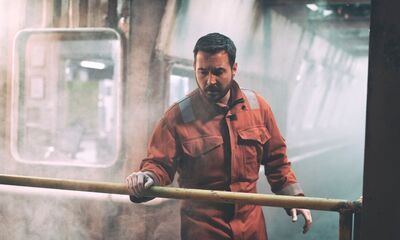 Watching Prime Video’s latest supernatural thriller, “The Rig,” feels like watching an episode of “Doctor Who” where the titular Time Lord never shows up. All the other ingredients are there: An evocative but economical-to-shoot location (in this case, a Scottish oil rig), a modest cast of UK character actors led by a couple of big guest stars, and a supernatural force that requires lots of running down dark corridors. But this time, there’s no space wizard with a magic wand to save the day—the day players have to figure their conundrum out on their own.

That’s a big part of “The Rig” ‘s homespun charm, coasting through its eco-horror trappings with underdog gumption, even if it doesn’t have the budget or the thematic weight to give its ideas purchase. Its basic setup is the stuff of “Alien,” “The Thing,” and “The Mist” all rolled together: A group of oil rig workers, all getting ready for their last shaft before a long-awaited leave, suddenly run afoul of a strange fog that cuts them off from the outside world. What’s more, their drilling may well have awakened something ancient, something that wants to punish mankind for their disturbance of the natural order.

Over the rest of the six-episode series (only three of which were provided for review), “The Rig” plods along the typical survival-horror beats with the predictability of the tides. The cast is game but large, and they strain against the flatness of their characters and the little screen time they’re given to grow them. There’s the stern-but-professional company rep (“Schitt’s Creek” ‘s Emily Hampshire), who (wouldn’t you know it) wanted to be a paleontologist and acts as our erstwhile Ripley figure. Don’t forget the pragmatic rig supervisor (Iain Glen), desperate to keep his exhausted, scared roughnecks from tearing themselves apart. Among the rank and file, we’ve got the bright-eyed newbie (Calvin Demba) who’s waiting to go home to his wife and family, the stalwart second-in-command (Richard Pepple), the world-weary medic (Rochenda Sandall), the reckless, brutish mutineer (Owen Teale), the list goes on.

Granted, David Macpherson’s script does its level best to ramp up the tension slowly, settling us in with the broad strokes of these characters in their day-to-day before seeing how the crisis with the fog, and all the attending crises that follow, push their respective buttons. Like the sci-horror films mentioned earlier, “The Rig” revels in the workaday competence of its cast of characters; they’re good at their jobs but exhausted and frustrated with the isolation of rig work and the disappointing pay. More than the inscrutable nature of the force they encounter out there, much of the show’s appeal lies in putting these already-worn-out characters in a pressure cooker just to see how it changes them.

Trouble is, the central mystery of “The Rig” is hardly all that mysterious or original. At its core, it’s a Lovecraftian story of mankind digging into the deepest corners of the Earth and unleashing something that, in so many words, drives them mad. A character falls off a tall scaffolding early in the first episode; he’s all but dead without any real medical assistance. That is, until whatever force is in the fog gets into his bloodstream, and he’s back to life, mysteriously healed and muttering portentous phrases like “Something’s coming.” (Macpherson’s dialogue is effective, but workmanlike, and features corny bon mots like that and “I don’t have to guess; that’s the great thing about science.”)

That’s the main thematic thrust of “The Rig”—reflecting on the damage oil work wreaks on the planet and our sense of responsibility for it. Characters squabble over the feasibility of renewable energy, and what it would do to their jobs; old guys who just want to put food on the table bicker with Millennial riggers who feel stuck with the bill.

This notion bleeds through into the mechanism of the infection and what it does to the organisms it takes over. That makes for some particularly gruesome body horror, especially as it rejects any inorganic material in the host body. False teeth ping out of mouths, heart-shaped tattoos bleed out to grotesque effect. “We f**k the planet,” one rigger snaps, “and then we’re surprised when it f**ks us back.”

In those first episodes at least, director John Strickland (“Line of Duty”) ekes out a healthy amount of atmosphere with what is surely a small budget. Especially striking is how he shoots the rig itself, cherry-pickers swinging and undulating the camera around the spider-like scaffolding of the rig’s infrastructure. The show still looks cheap in the more brightly-lit common areas, and its visual effects stumble a bit due to the budget (especially in the more green-screen-heavy exterior sequences). But the exteriors mine a lot of production value out of the location, the loneliness of the oil rig popping out of the Atlantic, and the menace that could lurk around any corner, man or creature.

Macpherson doesn’t reinvent the sci-horror wheel, save for a bit of eco-horror philosophizing here and there. But the show is effective in a nuts-and-bolts thriller way, with a cast of game Scotsmen (and a few others) grimly solving problems ranging from mutinies to prophecies to apocalyptic mechanical disasters. It’s “Deepwater Horizon” by way of “The Happening,” and if that appeals to you, well, perhaps it’s time to start your six-hour shift on “The Rig.”

Three episodes were screened for review. “The Rig” will be available on Prime Video on January 6th.

The name is Bond, James Bond