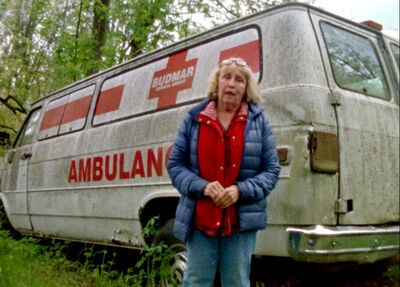 If John Gannon hadn’t thought fast, leaned over, and thrown the car into reverse as the train was fast approaching, filmmaker James Gannon wouldn’t be here today. Sometimes we’re blessed with lightning fast, life-saving instincts. Sometimes we’re not, and we get crushed. As it stands, though, John and his wife Elizabeth are still here, with seven kids and eight grandkids. But what about that train?

Gannon’s “Deerwoods Deathtrap” tells the story of his parents who, 50 years ago, embarked on a road trip through Pennsylvania with their (at the time) two kids and John’s mother. It seems like every town has train tracks running through it that are never used, or possibly abandoned. The Gannon family was aware of these tracks as they traveled, but nevertheless, as they stopped at one of the intersections, a train happened to be moving at top speed, headed for their car, which had accidentally moved forward onto the tracks. Why now? What purpose did this train serve at that time? Of all the trains … of all the train tracks … of all the times to get stuck on abandoned train tracks.

The story is told to us, rather charmingly, by Gannon’s parents, who can mostly agree on how it all went down. There are a few “Rashomon”-like moments when it comes to the details (“The radio was on.” “The radio was definitely not on.”), but this is not a case of who’s right or wrong (Gannon leaves the radio music in for the retelling, because a good director knows that having the radio on adds to the atmosphere of the story). This is a case of the different memories we have of a shared experience and how they inform our lives. Sometimes, such moments make philosophers of us. Other times, it’s just this weird thing that happened once upon a time.

I’ve covered Gannon’s work here before with “The Christmas Light Killer” and “Betty Feeds The Animals,” the latter which starred Gannon’s mother as a kind of patron saint for neighborhood pets and wildlife. Lest you think from watching “Deerwoods Deathtrap” that the Gannons are aloof about these seemingly life-altering events, I would highly recommend you watch the other documentary about his parents, the highly emotional “Three Envelopes,” which he made with his brother Joseph.

Gannon knows what makes his parents’ stories interesting and always manages to find the humor and the heart within all of them. His films make you want to talk with your own parents about singular events and their own brushes with death. I, for one, feel grateful that the Gannons are still here and that we get to see short films about them.

When did you first hear this story and how did you know it should be the subject of your next film?

I’ve heard this story for as long as I can remember, since these two people are my parents. My father is a big storyteller and loved to tell the story about the time he was hit by a train and survived. It was just a part of the Gannon family lore for the last 50 years and while going through some old slides and seeing my father all beat up after the accident I thought this could be a film. Also, after making “Betty Feeds the Animals” entirely about my mother, I wanted to do something that focused on my father as a companion piece.

How did you find or reconstruct the broken windshield?

My best friend, Jimmy Cochran (who was the subject of “The Christmas Light Killer”), works at a farm that does holiday-based events (hence why he was turning off the lights in “The Christmas Light Killer”). This farm also does a haunted hayride where they have horror scenes throughout a wooded area. I called him up and asked if he had any windshields I can smash for this movie? He gave me four cars I could use to do whatever I wanted with. We smashed windshields, he crashed a tractor into the car (shot briefly in the crash sequences), we just had a ton of fun recreating the crash. Side note, I initially had an idea to have my dad bash in the windshields … I shot this but it didn’t fit in the story correctly … as much as I loved it.

Lately, when it comes to movies about your family, you seem to be in favor of using 8mm film. For “Betty Feeds the Animals,” you said you wanted it to feel timeless and warm. What went into the decision for this darker story?

Super 8 felt right for many reasons for “Deerwoods Deathtrap.” It felt right as a companion piece to “Betty Feeds the Animals.” I also fell in love with the way it looked with “Betty” and couldn’t see the film in any other format. But mainly, I grew up looking at those slides, looking at old photos from that time and it was an analog memory. There was texture to it, I could hold these artifacts and use my imagination to fill in the visual gaps of the story. Digital would have been too crisp and cold to me, it was a story about the past and it felt it should feel that it is from the past.

With this and “Three Envelopes,” you’re documenting your parents’ lives with an eye toward their mortality. Do you look at this as an ongoing process with more to explore? Or do you take this one idea at a time as they come up?

I take this more as one idea at a time. I think a psychologist would have a field day with me after watching these movies. I think it’s pretty transparent that I have a great fear of the inevitable death of my parents. It’s something I know I will have to endure one day and making these movies is some sort of way of trying to get ahead of that. It does give me a sense of calm knowing that I have captured them, their stories, their personalities in these ways that will live on as long as this world keeps spinning and we have some sort of way to watch movies. It’s something that my family will have to visit my parents long after they are gone, spend nine minutes with Mom and Dad being goofballs and being able to remember their voices and see their faces.

Were you hoping for a different answer when you asked “Did this event bring you closer together?” (It is the film’s funniest moment and I’m glad you left it in.)

I was hoping for a different answer and am so happy I didn’t get one. I didn’t really know how I was going to wrap the movie up … I obviously knew how the story ended … but how do I wrap up the retelling of it? So I asked them that, thinking I would get some sort of cliché, but sweet statement about a new perspective on life. But nope, in classic fashion of my parents being so much funnier than they could ever imagine, they deadpan said that surviving the crash did nothing for them and I wouldn’t have it any other way.

What’s next for you?

I am in pre-production for my first feature, a narrative set in the desert in the early 1980s. [It will be] shot all on 16mm and is intended to feel like a film from the ’70s.