Netflix’s That ’90s Show is a Lackluster Throwback 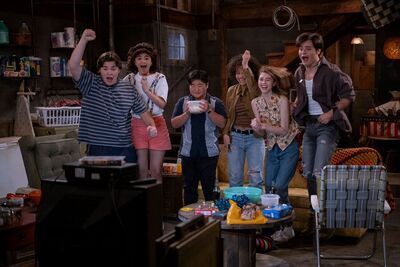 As our critic Monica Castillo said last week in her review of the “House Party” remake, “Nineties nostalgia is in full swing.” Take this week’s latest throwback as the latest way that Hollywood is thrifting a decade of neon colors, denim vests, and riot grrrl punk rock: Netflix’s “That ‘90s Show,” from the original creators who gave us the star-making factory in “That ‘70s Show” with Topher Grace, Laura Prepon, Wilmer Valderrama, Ashton Kutcher, and Mila Kunis. Taking place two decades later, “That ’90s Show” is a harmless, also relatively pointless piece of nostalgia that has an even deeper fondness for a mustier style: the TV sitcom. There isn’t much special about this spin-off featuring a new teen generation, as mild comedy guides them on wholesome travails that land on the old(er) couch in the basement.

For anyone who might recall a previous, infamous FOX show called “That ‘80s Show,” this one is different. It has an official connection to the original show, and the presiding grandparents to prove it. Kurtwood Smith and Debra Jo Rupp return as the patriarch and matriarch, respectively, of the Wisconsin home that hosts a new generation. They’re also the biggest stars of the returning cast this time, with plenty of time for Kitty’s whimsical flights of fancy and overexcitement or how the Archie Bunker-esque Red finds a new way to threaten to put his foot up someone’s ass.

In this update, former high schoolers Eric (Topher Grace) and Donna (Laura Prepon) now have a kid named Leia (a charismatic Callie Haverda), who inherits the same hormones, plucky nature, and malleable innocence that helped make Grace’s character so beloved. Instead of being shuttled off to Space Camp for the summer, she convinces her parents to let her stay with her grandparents Red and Kitty and to make friends with their neighbors who are Leia’s age. Throughout this first season, Leia’s new friends help her with first-kiss jitters, sneaking into a rave in Milwaukee, learning to drive, and more.

This season introduces a new batch of easygoing teenagers who are interconnected in a way that makes them like extended family. Riot grrrl Gwen (Ashley Aufderheide) is siblings with puppy dog jock Nate (Maxwell Acee Donovan), who is attached at the lips to the academically focused Nikki (Sam Morelos). Nikki is the sister of the often-eye-rolling Ozzie (Reyn Doi), who is looking to come out as gay to Kitty and others. And of course, there’s the next generation of Kelso in his son Jay, with Mace Colonel taking after the same macho goofiness that made Ashton Kutcher a star.

It’s a charming cast—and more diverse than the original, which is always welcome. But the whole approach loses its own innocence and whatever waning cuteness it can conjure by feeling too much like a stubborn repeat. Instead, we’re coddled with overzealous laughs from the audience at a bunch of C-grade jokes or stuck with dead silence whenever the show makes a chintzy bid for emotional poignancy. The brightest facet is the cast’s collective energy: at least they can sell stuff like “I almost nicked my nerps!” and the show’s bounty of Wisconsin-based riffs (Andrea Anders, as the tornado-ing, sweet neighbor Sherri who gets on Red’s nerves, is particularly good with these).

And how are those juicy references to the ‘90s? They’re scattered throughout but not overbearing—sometimes gags will include cameos for a new desktop computer or Lip Smackers, or tickets for a movie like “Batman Forever” will be referenced as a plot point. The most distinctive ‘90s homages are its characters’ TV fever dreams, with moments that recreate bits of “Beverly Hills 90210” and talk shows like “Ricki Lake,” the latter a sequence that gives Doi a chance to rule the roost. I was most struck by an end credit for James Iha, guitarist of the Smashing Pumpkins—he provides the music for the series, which might include the guitar/drum bursts that the series uses to cap off a scene.

As for the original cast, you can nearly clock how long the studio audience applauds and cheers for them when they pop back into Red and Kitty’s time capsule of a kitchen. Just as much, you can surmise their professional boundaries in giving this TV franchise from 1998-2006 any more than flashes of their previous selves. The late ’90s were good to these actors, and the original’s success gives Smith and Jo Rupp more time to lead in this second go around. And maybe this formula will have the same star-making effect for some of its young cast here. But everyone’s better intentions, and jokes, are likely elsewhere—maybe to something that doesn’t just toss a Capri Sun to what was going on 20 years ago and call it refreshing.

Eight episodes screened for review. “That ’90s Show” is now playing on Netflix.