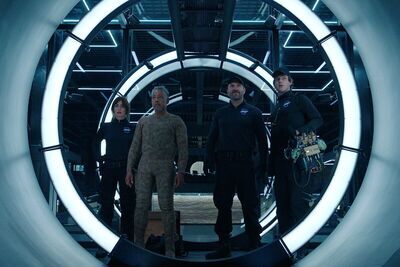 The first new streaming series of the year is one that plays with the way people watch shows on streaming giants like Netflix. With all eight episodes of “Kaleidoscope” available at once, why not have some fun with the order in which people watch the season unfold? Seven of the eight episodes of this heist thriller will play out in random order, different for you than your neighbor, culminating in the same final chapter for all. While the gimmick sounds like a neat way to play with character and storytelling, creator Eric Garcia doesn’t take quite enough advantage of it, revealing that there’s something lost when a story unfolds randomly. It doesn’t allow the arcs of these characters to build in the same way that they would in a more traditional season structure. It feels like the team needed to go all-in and give each episode a drastically different POV and maybe even visual language, but they really just deliver something that feels chronologically jumbled. It often repeats character beats—probably because the writers don’t know what you know at this point—and that leads to a product that feels more manipulative and melodramatic than it should. People love heist shows because they’re lean, cool, and captivating—meandering and repetitive are words that derail this genre more than most. There are performances from an admittedly engaging cast that hold “Kaleidoscope” together in the moment, but it loses its shape pretty quickly.

Here’s where things get a little tricky because what a critic would normally reveal in a synopsis could be something you don’t see until the seventh episode you watch, so I’ll tread lightly. The always-great Giancarlo Esposito plays Leo Pap, the Danny Ocean of this crew of misfits who has been dragged back into a criminal life for one final, personal score. His closest ally is Ava Mercer (Paz Vega), the heist participant with the most public face as a high-profile attorney. She also happens to be a weapons specialist and an old friend of Leo’s. The troublesome younger members of the crew include Judy Goodwin (the charming Rosaline Elbay) and her loose cannon of a husband named Bob (Jai Courtney). Peter Mark Kendall and Jordan Mendoza round out the crew.

Of course, every good heist project needs an enemy, and that role is filled by the excellent Rufus Sewell as Roger Salas, a titan of the corporate world with an old connection to Leo. He works with someone else connected to Leo named Hannah (Tati Gabrielle) while two FBI agents named Agent Abbasi (Niousha Noor) and Agent Toby (Bubba Weiler) obsess over the massive heist that they have discerned is coming but may not be able to stop.

Each episode allows viewers to enter the heist at a different point with a different color code. For example, there’s “Yellow: 6 Weeks Before the Heist,” “Pink: 6 Months After,” and “Violet: 24 Years Before the Heist,” an episode that includes some pretty questionable de-aging of Mr. Esposito. Like so many Netflix shows, “Kaleidoscope” struggles with mid-season sag even without a traditional season. No matter what order you watch these in, you will find yourself frustrated with repetitive character beats that somehow leave most of this crew feeling underdeveloped anyway. It’s probably because writing a season like this doesn’t allow for building character as much repeating them. And some of the manipulative material involving class and race feels cheaply written. The excellent Noor has a monologue about how she became an FBI agent that’s so shallow, and a chance to really dig into how race impacted Leo and Roger differently is mentioned and then ignored. So many of the ideas in “Kaleidoscope” are paper-thin because it kind of requires linear storytelling to get thick.

So what’s left? “Kaleidoscope” is admittedly fun at times, playfully bursting into action in ways that aren’t always predictable. There’s a strong energy between the heist crew members that made me wish that “Kaleidoscope” had unfolded in the right order. In the end, the gimmick of “Kaleidoscope” can be singled out as the main culprit for most of the show’s flaws (although it could have probably been tightened by two episodes no matter what). The very thing that might bring a larger crowd to it this first week of January is what kept bugging me about it. Its structure may make it one of the more successful early 2023 shows but the year is about to get packed already with shows like “The Last of Us,” “Shrinking,” and “Poker Face.” These colors will likely have faded by Valentine’s Day.