Hunters Finishes the Chase With a Scattered Final Season 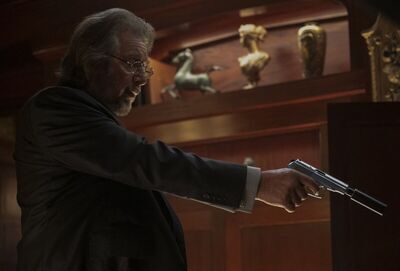 It’s been a whopping three years since the first season of “Hunters,” the Jordan Peele-produced grindhouse-Nazi-killer thriller that saw Al Pacino as the head of a group of colorful Nazi hunters busting caps in escaped German asses in the 1970s. That first season was a lot, balancing the kind of comic-book, exploitation movie goofiness you’d expect from Quentin Tarantino and Silver Age comics with haunting depictions of the horrors of the Holocaust. It was a show that used its young protagonist, Logan Lerman’s neophyte “hunter” Jonah, to chart the rot your soul acquires when you engage in even the most righteous rampages of revenge.

But the way that the first season ended makes a tough act for a second season to follow, especially considering a) it’s coming out years later and b) it’s also one of those rushed final seasons that are becoming de rigueur in this new era of streaming-service attrition. First, we learned that Pacino’s Meyer Offerman, the Professor X of this motley crew of hunters, is actually an escaped Nazi who killed the real Meyer and took his place. Then, we learned that Hitler (played in season 2 by Udo Kier, because who else are you going to get?) is still alive, with Lena Olin’s unnamed Colonel revealed to be Eva Braun herself. It was a bonkers twist that turned the show’s solemn ruminations on the deep ache of Jewish trauma from the Holocaust on its head. Creator David Weil clearly wants to have it both ways — pay homage to the fallen, but also have fun avenging them — and “Hunters”’ tone is caught square in the middle.

To its credit, season two streamlines things in some ways, even as it grows clunkier in others. For one thing, it skips ahead a couple of years, showing the Hunters scattered and purposeless after a disastrous mission in Spain some months back. But Jonah catches a break when he reunites with FBI agent Millie Morris (Jerrika Hinton), who now sees the value in their work. With a tip from former Nazi congressman Biff Simpson (Dylan Baker), they know Hitler’s still alive, and they get the band back together for one last mission to bring him to justice.

Even though this season is shorter than the first (down to eight episodes, ranging from 45 minutes to an hour-plus), “Hunters” feels as overstuffed as ever. It hardly helps matters that, in a seeming bid to keep its biggest star in the show, season two intercuts a flashback narrative featuring Pacino’s Meyer, trying to keep his true Nazi identity secret two years before Jonah would kill him in the first season’s finale. It’s always nice to see Pacino on screen, his Borscht-belt accent here notwithstanding. But he feels like a ghost, a vestigial element from a show that no longer needs him in the story but wants to keep his marquee appeal. You could cut his subplot alone, and you could trim the season down by at least a couple of hours without losing anything.

In fact, much of the second season feels flattened or repetitive, shucking entire elements from the first season (the exploitation/comic-book element, which contrasted Jonah’s innocent visions of revenge with the harsh, soul-eroding realities) for something more conventional. Granted, the cast is still having fun, especially Kane, who does a lot with very little (save for a jaw-dropping monologue in the last episode, she hardly gets any character beats to work with) and Greg Austin, who eats up the scenery as Travis, the Third Reich’s resident Anton Chigurh-type. Jennifer Jason Leigh even joins the cast as Jonah’s long-lost Nazi hunter aunt Chava, cagey and calculating as only she can be. Olin feels sidelined compared to last season, but it’s devilish fun to watch her Eva scheme to usurp the Reich out from under feeble Adolf’s tiny little mustache.

But the writing still feels overstuffed, Weil and his writing team pinballing from solemn reverence for the victims of the Holocaust to cheeky Mod Squad (Chabad Squad?) antics. Subplots and characters are picked up and dropped unceremoniously, and deep-seated character conflicts resolve at the pull of a trigger.

There’s something of “The Boys” in “Hunters”’s tongue-in-cheek atmosphere, from its giddy bits of gore to style parodies that send up everything from “The Sound of Music” to cheesy ‘70s sci-fi flicks. The penultimate episode is a standalone fairy tale set in 1942, about an elderly German couple and their moss-covered dream house. In isolation, it’s a really neat hour of television, feeling like the opening of “Inglourious Basterds” stretched out to an hour and directed by Wes Anderson (complete with cross-section dioramas of the quiet, happy lives the couple and their Jewish charges lived together, separated by walls). But then the hour ends, and you’re left wondering whether it was worth sacrificing one of the show’s final hours for this.

To its credit, the show is diverting to watch from moment to moment. it’s shot with heaps of atmosphere, the action scenes are well-staged, and Rupert Gregson-Williams steps into the composer’s chair for a bombastic, energetic score (and new, invigorating title theme). But you can feel the strain of a show waiting too long to tell its next chapter, only to be told it has to wrap everything up in just a few episodes. Not just the stories of our characters, both living and (especially in Pacino’s case) dead, but of the six million Jews who died in the Holocaust.

It’s clear Weil wants to use this show to pay homage to them, especially in its two-episode epilogue that really hammers down on notions of legacy and memory. One minor character in the finale is named after Weil’s grandmother, for whom this show is a self-professed “love letter.” But that downcast solemnity, that desire for real truth and reconciliation for one of history’s great atrocities, inevitably makes way for the next explosion, the next pair of legs running down a hallway in bell-bottom jeans, gun in hand. That’s “Hunters”’ real legacy, a show that tried to serve two tonal masters and never quite managed the balance. (Watch the last two episodes, at least; even in isolation, they make for invigorating television.)