Happy 2023 from Chaz Ebert and All of Us at RogerEbert.com! 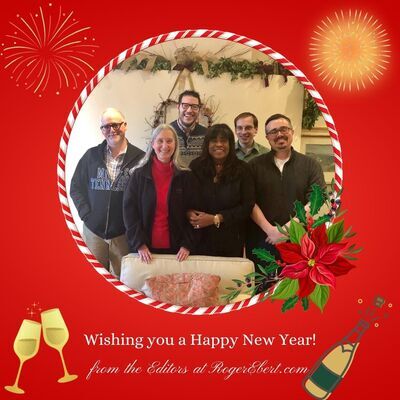 To All Our Cherished Critics, Contributors, Readers and Subscribers:

Merry Christmas! I hope 2022 has been a bit healthier and happier for you. And I hope that we here at RogerEbert.com have contributed to some of your joy by sharing our film reviews, TV/streaming reviews, collections, interviews, blog entries and more. All of our contributors and their individual collection of published work, can be found here. But none of that happens without this team: Managing Editor, Brian Tallerico; Editor-at-Large, Matt Zoller Seitz; Senior Editor, Nick Allen; Literary Editor, Matt Fagerholm; and our Contributing Editor, Nell Minow. I am so grateful to them, and to all of you.

Before we embark on 2023, I’d like to take a moment to look back at 2022. In January, we returned to the Sundance Film Festival, publishing dispatches from our editors Brian Tallerico and Nick Allen as well as our contributors Marya Gates, Robert Daniels and Isaac Feldberg. In February, Barbara Scharres brought us highlights from the Rotterdam International Film Festival, while our annual Women Writers Week was held in March, showcasing the essential work of so many brilliant female writers.

We honored the anniversary of my late husband Roger’s passing on April 4th, 2013, by sharing some of our contributors’ favorite reviews penned by Roger. At the end of April, we held our latest installment of Ebertfest at the Virginia Theatre in Champaign, Illinois—our first since the COVID-19 pandemic began. We were graced with singing by Tammy McCann and the band Ther’Up.Y, fronted by Aplustrodamus (Aaron Wilson. Some of our special film guests included directors Ramin Bahrani and Terry Zwigoff, actors Thora Birch and Krisha Fairchild, and many others. In his coverage, Matt Fagerholm said coming back together with this special in-person edition of Ebertfest was nothing less than “a tonic for the soul.”

In May, I returned to the Cannes Film Festival along with Scott Dummler of Mint Media Works, where we produced a series of video dispatches featuring our contributors Ben Kenigsberg, Jason Gorber and Lisa Nesselson. Our second Black Writers Week was held in June with guest editors Robert Daniels, Danielle Scruggs and Black Harvest Film Festival co-founder Sergio Mims, who passed away in October at the age of 67.

I was pleased to wish the trailblazing TV legend and former Ebertfest guest Norman Lear a happy 100th birthday on July 27th. Our contributors gathered in August to celebrate the eleven years’ worth of essential reviews penned by our contributing film critic Odie Henderson, who was subsequently hired to become The Boston Globe‘s chief film critic. At the Toronto International Film Festival in September, I presented Oscar-winning filmmaker Sam Mendes, whose latest film is “Empire of Light,” with the TIFF Ebert Director Award. Brian Tallerico was joined by Robert Daniels, Marya Gates and Soren Hough to pen this year’s dispatches on awards season hopefuls at the festival.

Chicago’s pioneering art cinema FACETS Multimedia, founded by the late Milos Stehlik, hosted its first Screen Gems Benefit since before the pandemic. I was honored to receive the FACETS Legend Award. The event reached its monetary goal to benefit the Bross Scholarship Fund, which supports under-resourced youth. In October, I was honored to serve on the jury for the New Directors Competition at this year’s Chicago International Film Festival, where I presented the Roger Ebert Award to two directors: first, the Danish director Katrine Brocks for her very moving film “The Great Silence,” about a novitiate nun who has to confront her own lessons in forgiveness before taking her final vows. It shared the Ebert Award with Michael Koch’s Swiss-German co-production, “A Piece of Sky.” This film was chosen as a poignant example of one of Roger’s key principles, Empathy.

In November, I paid tribute to my grandson Joseph London Smith, who was killed this past August as an innocent bystander. He was thirty years old, a filmmaker, and a joy to our family. It took some time for me to be able to share this heartbreaking grief. But it was important to me and my family to speak out against this senseless gun violence sweeping our nation. We also wanted people to know that Joseph was not a statistic, but was a young man who was deeply loved and cherished by his family.

We lost many other extraordinary people this year, including Sidney Poitier, Peter Bogdanovich and Angela Lansbury and paid tribute to them with thoughtful and illuminating tributes. You will find many more in our Tributes section.

As per our tradition in December, our writers at RogerEbert.com presented their picks for the Top Ten Films of 2022 in both a composite list headed by Martin McDonagh’s “The Banshees of Inisherin” and their individual top ten lists. Brian Tallerico, Nick Allen and Robert Daniels were joined by their fellow television critics Clint Worthington, Cristina Escobar and Nandini Balial in selecting the 25 Best TV Series of 2022, while various writers spotlighted the Great Performances of 2022. I have to admit this has been a very strange year for me in films, so instead of a Top Ten list, I presented an essay about the Most and Least Fun I had at the movies all year. Now I am looking forward to all of the awards talk that will take place until the various awards are announced, culminating in the Oscar ceremony scheduled for March 12th, 2023.

Once again, I offer my thanks to all of our writers, and to you, our readers and subscribers for keeping   film discourse alive and well.

Roger, the conversation about movies continues…

Here’s wishing you many blessings throughout the new year: Health, Peace, Joy, Prosperity, Love and above all, Good Movies!

Glass Onion: A Knives Out Mystery