Forget the New Witcher Show, Play the Old Game Instead 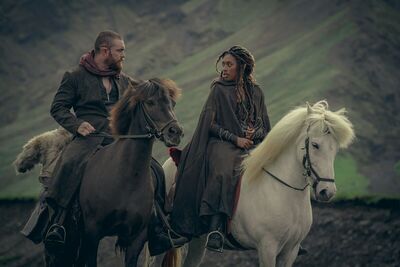 “The Witcher” franchise is unusual in that it feels like the momentum of the Henry Cavill-led series and beloved game has been treading water. Cavill notoriously left the Netflix hit after the already-filmed third season (and then got booted from the future of Superman anyway) and there hasn’t been a proper new game in ages. And yet Geralt hasn’t gone away. He’s still a major part of pop culture, popping up in the latest season of “Fortnite” for example, and there are two new ways to explore this universe this holiday season. Well, one new, one new-ish. The new is the Netflix four-episode first season of “The Witcher: Blood Origin,” a prequel to the core series that stars the overqualified Michelle Yeoh and Minnie Driver. The new-ish is a next-gen update to the award-winning masterpiece “The Witcher 3: Wild Hunt,” complete with new graphics, multiple tweaks, a new quest, and all the previously released DLC. The game will remind players how robustly detailed the storytelling is in this influential fantasy masterpiece. The show will just make them wish they were playing the game.

Let’s start with Netflix. “The Witcher: Blood Origin” digs into material from the Andrzej Sapkowski books on which the game was based to detail the creation of the first Witcher in a story that unfolds 1,200 years before the core Netflix series. (Prequels were big in fantasy TV this year.) The show opens with a familiar face in Jaskier (Joey Batey) as he struggles through a bloody battle that’s interrupted by Driver’s Seanchai, who kind of serves the same role that Cate Blanchett did in “The Lord of the Rings” films as she tells the story of the early days of this land to Jaskier.

“Blood Origin” follows a classic fantasy series structure in that it gathers a merry band of misfits to save the day from a potential event that could shatter the peace in this land, which allows the writers to play with different character types in one “fellowship.” The leaders here are Eile (Sophia Brown) and Fjall (Laurence O’Fuarain), the former a musician and the latter a disgraced guard who was exiled after getting a bit too intimate with a princess named Merwyn (Mirren Mack), who ends up becoming the villain of the piece. The four episodes of this mini-season do little more than set the table as Eile and Fjall join forces with Scian (Yeoh), Meldof (Francesca Mills), and others.

Despite its undeniable production values, everything about “Blood Origin” feels minor. There’s a romance that’s bland despite the charisma of its stars, and Driver and Yeoh aren’t given nearly enough to do. And everything feels like merely a way to tide people over until the third season of the proper show (which will be Cavill’s last before Liam Hemsworth takes over). It’s as if Netflix looked at the numbers on Christmas weekend for “The Witcher” and rushed this thing into production when they learned that season three wouldn’t be ready. It’s for hardcore fans only, and even they will be bored.

Do you know what’s not boring? “The Witcher 3: Wild Hunt.” While the four hours of “Blood Origin” will barely get you through the tutorial of this massive game, the next-gen updated version is really the better way to spend your time this holiday weekend. Released in 2015 for the PS4, the game was recently given an extensive patch that not only enhanced the visuals but opened up some of the controls and even added a new quest based on the show that allows players to get Geralt’s armor. (You can also cross-save now across platforms, a boon for the game’s many fans who also play on PC.) It’s not quite the overwhelming remake of something like “The Last of Us, Part 1” but it’s a reminder of how remarkable this game is from top to bottom, immersing players in a richly detailed world that now feels even more alive than it did seven years ago when the game won pretty much every award it could.

The team behind “The Witcher 3” took the opportunity of a next-gen update to truly refine the game, changing some of the camera options, allowing spells to be mapped to face buttons, and even contacting some of the game’s fans to pay them for modifications that improved on the original release. It’s a reminder of how loyal the fans are to this game that some of them have now become a part of its legacy. That’s the main reason that “The Witcher” franchise keeps going—its fans won’t give up on it. Let’s hope Netflix understands that loyalty and repays it with something they deserve in the future.

Whole season was screened for review.

Glass Onion: A Knives Out Mystery