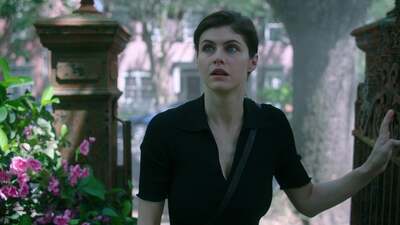 Just a few months after releasing their TV version of “Interview with the Vampire,” AMC continues its investment in the Anne Rice business with a new show, focused on a new supernatural lineage. Instead of the Vampire Lestat, this new series from creators Esta Spalding and Michelle Ashford is about the women of the wealthy and mysterious witches in the Mayfair family, the subject of three books by Rice.

In keeping with the lineage of witch stories across film, TV, and books, “Anne Rice’s Mayfair Witches” depicts generations of women and their experiences that echo across lifetimes, going up against types of entitled, gross, manipulative men who are a fact of patriarchal societies. This also means that “Mayfair Witches” has a whole lot of backstory—there’s even a look at the Mayfair women in the 1600s, and it only nudges the overall story along so much. There’s a vital excitement needed for the latest and main chapter of Mayfair lore that’s gravely missing here, despite it having some style that includes the pervasive presence of dark teal and more sumptuous New Orleans production design from Rice’s developing TV universe. But no saga about a person learning about their witch ancestry, and the secret society meant to protect them, should feel this hollow.

Alexandra Daddario stars in the series as Rowan, a neurosurgeon in San Francisco unaware of her connection to the Wayfair clan in New Orleans. One day, when hitting a boiling point with a condescending male boss at her workplace, she gains the ability to burst people’s brains. Freaked out by this, she brings it up to her adoptive mother Ellie (Erica Gimpel)—who is on her deathbed—and who tells her to think nothing of it. When it happens again, and after Ellie passes, it begins a grieving self-discovery for Rowan, which takes her to New Orleans, where she learns about her birth mother, Deirdre (Annabeth Gish).

For years, Dierdre has been in a silent, catatonic state, spending her days on the porch of her sister Carlotta’s (Beth Grant) home and being taken care of mostly by family maid Delphine (Deneen Tyler). As we see in flashy flashbacks, Dierdre has been tormented by—after being seduced by—the same figure who also haunted her mother, a man named Lasher (Jack Huston). Appearing in these hazy sequences with a sleazy grin primed for a grimy dive bar, Lasher is meant to be a symbol of all that has controlled and manipulated the Mayfair women for centuries. Instead, he becomes a cheesy symbol—in part thanks to Huston’s scant charisma—for how this story can’t conjure a claustrophobic danger. The possible thrills of getting some creepy, sensual, and/or dramatic horror from “Mayfair Witches” suffer for it.

The fun of “Mayfair Witches” can be so iffy that it struggles to make much intrigue out of its aforementioned secret society of witch-protectors, named the Talamasca. Rowan receives some assistance and camaraderie from a Talamasca employee named Ciprien (Tongayi Chirisa), offering her a stronger grasp of this new world. His heroism comes with his own gift—Ciprien can touch something and be able to see its past, like when he touches the gates to the Mayfair house. When he touches Rowan for the first time, it nearly knocks him out, a testimony to how she has a special degree of power, even though she doesn’t know it.

Daddario is good in the role that the series spends a lot of time table-setting for, especially with how much time the series dedicates to making her a person of the people, a type of innocence we are meant to root for and cherish. She can be playful as a vagabond who lives on a boat and lives a free sexual life, but we’re also meant to appreciate her integrity, which could be jeopardized by Lasher. It’s the general sullen nature of the series that sucks the life out of a few of its figures—despite having such a unique life’s work, Ciprien is too bland thanks to his grave seriousness. “Mayfair Witches” gets its most curious mileage from Beth Grant as Rowan’s sly great aunt Carlotta; her shark smile and fervent religious repression create their own striking mystery, one that gets freakier once she invites Rowan into her home.

The plotting of “Mayfair Witches” is too drawn out for its own good, with episodes one and two showing how a story can provide a lot of information and connected lives without accumulating a good pace. But the series does come to life when it brings in something trickier than Rowan’s journey of self-realization. Episode three, directed by Axelle Carolyn, takes off from a shocking death in the last shots of episode two; it helps build a murder mystery while raising more supernatural elements, leaning into the weirdness that helps this series stand out most. And the slickest one may be episode five, directed by Haifaa al-Mansour. Playing out almost like a standalone episode, it gives more momentum to the mysteries at hand by crafting a psychological maze for Rowan to break through.

It seems possible that fans of the books will at least appreciate how much space this show gives its saga—it’s all about the characters’ backstories, but in a way that’s uniquely, frustratingly counterintuitive here. So much gets tangled up or forgotten about—even the worry about Rowan having uncontrolled brain-bursting powers, the focus of the first two episodes, becomes an afterthought. But the talent in front of and behind the camera makes the problems even more glaring: it’s telling how even talented directors like Carolyn and al-Mansour can’t bring “Mayfair Witches” to life.